As promised, the following were photos taken during our flight with our friend in his 210 Cessna. Peter and Captain sat in the front seat and I sat in the back. They had the luxury of having headsets that not only allowed you to hear the conversation but also to speak.

MY headset only allowed me to hear. There are all sorts of ways I could go with this, but it wasn’t in an effort to muzzle me, that I sat in the back. However, I now wish I could have asked more questions while we were underway. And what I did hear should have been taken down in notes, but I was much more interested in seeing the views and taking pictures – so, along with a lot of very interesting information that was given, much of it has “flown away” in the breeze of my brain.

I went to the Wikipedia site to get information on Mt St. Helens. I highly recommend you doing the same. http://en.wikipedia.org/wiki/Mount_St._Helens. I will also add that this posting is really about the photos. You really need to go to the website above, or one of many others to get the true facts as I may not have all my facts straight.

The pictures are intriguing; especially with the above website describing what has happened. It is a very humbling experience to see the results of such power. It is really mind boggling to see the mass destruction and the beauty of it all. 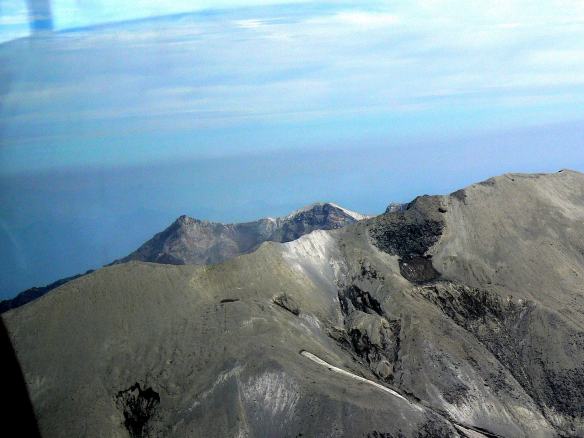 This is Mt St. Helens without her top. The edges are quite ragged and rugged.

It is a mile across the horseshoe crater. The mound in the center is the volcanic dome. Peter told us that initially there was no dome, but when it started forming, the volcano started spewing the volcanic ash out at a rate of about a truckload every three seconds. WOW! The outflow has since either stopped or slowed down significantly – at least for the moment. Remember, Mt. St. Helens is an active volcano and will come alive again sometime in the future.

Above is a picture of the glacier(s). With the growth of the mound they are now calling it Crater Glacier (East and West). In fact the two glaciers joined at the base of the mound this past May.

Here is a picture of a portion of the glacier(s) and the outer rim.

I call this photo “Mt St. Helen’s Spout”. You can see the glacier in the right bottom corner of the picture. What you see in the rest of the picture is where a side of the volcano was decimated and everything in its path, too. Notice a body of water in the upper left corner. Do you see the mass that begins just beyond the land and right before the water? That mass is all trees that were literally blown away in the blast. They were totally denuded in the blast. There are countless trees. And there are more that you can’t see – ones that have sunk to the bottom of the lake. Below is closer picture. Though it might look like a land mass forming, it is really an unbelievable amount of logs.

The area that may appear as a beach is really dead trees blown away by the volcano blast! Amazing!! I thought the logs would be recovered, but this entire area is a protected park and must stay as it is.

Capt and I want to thank our pilot, Peter, for a wonderful experience. This is one “Place We Go” that is truly a rare privilege and experience that we will always remember.  Thanks, Peter!!