Finally we found ourselves free to make plans – something we had not been able to do while the ailment controlled our lives. We are free to go for a month anyway; we have to come back for a checkup. We departed Bremerton, anchored over night in Port Ludlow, a favorite anchorage. Generally when we have been in there it has been fairly open, but the bay filled up that night. Next day it was on to Lopez Island and a rendezvous with DUTCH TREAT. We celebrated Bruce’s birthday and Peter’s which was coming up the next week. From Lopez Island we went to Friday Harbor on San Juan Island.

Friday Harbor is one of our favorite stops each 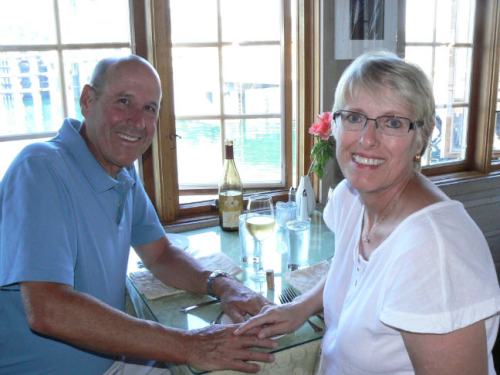 summer. This time was special as we chose it as the place to celebrate our wedding anniversary. We had a white tablecloth dinner at the very popular restaurant called “The Place”. If you decide you want to eat there make sure you get reservations. It will be worth it! 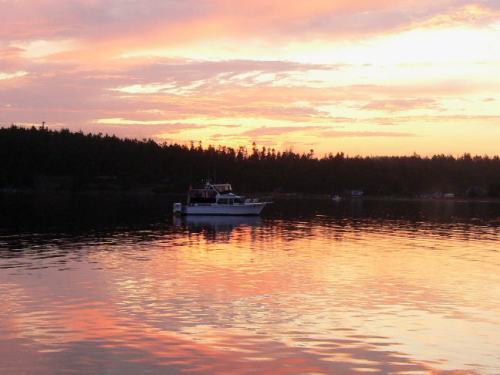 We had a very unexpected and unusual experience while we were anchored with DUTCH TREAT in Mackaye Harbor on Lopez Island.  Amazing as it seems to me now, we had never experienced lightning and thunder while underway or at anchor in the eight years we have been underway.  I guess we have been lucky!  However, the night we dined with Peter and Katherine the luck changed.  As we were enjoying the evening, lighting started, then thunder, and then rain.  We had dinked over to their boat when it was all sunny and warm.  Now we found ourselves away from home and no rain gear.  That really wasn’t the issue with me, though.  Rain is doable.  Lighting and thunder – especially the lightning part – ON WATER – is not something I particulary want to experience, and not in my little beater dinghy that putt-putts along!  I was ready to spend the night in Peter and Katherine’s V-berth.  I pretty much dug my heels in, intending not to leave DUTCH TREAT till the lightning moved on.  By now you should know I am NOT the captain, and the captain said, “We have to go, dear.  Can’t leave D/V all by herself, you know.” Well, I was really wanting to make an exception, but relented.  Peter gave me a raincoat, we got into our little dink and off we went – in the rain, lightning, and thunder.  Believe me, I counted by one thousands all the way home.  I always quit about one thousand three.  I figure I am safe by then – please don’t relieve me of that belief!  The picture of DUTCH TREAT is the morning after the storm.

From Friday Harbor it was back to Anacortes via Blind Bay. We made a fast car trip into Seattle to the watermaker store for new hose connections, shopped for more fresh fruits at Pike Place Market and took care of some more business. Dear friends 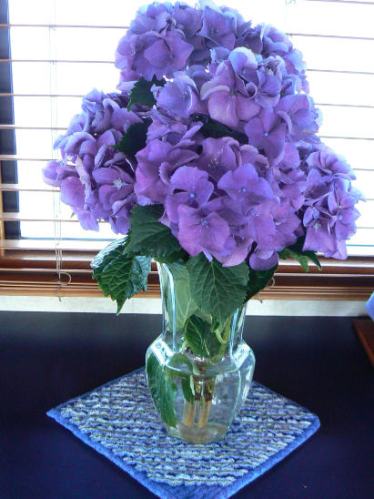 Mike and Karen, who we met in California on the docks, now boatless and living in the Anacortes area, came to dinner. We had a wonderful evening dining on DESERT VENTURE. Karen brought these beautiful hydrangeas from her garden – they are almost as pretty as she is!

And finally we are off! Where to? Would you believe Blind Bay? Yep! We met up with our friends on KIND OF BLUE one more time as they came back from Canada and we are headed into Canada. After a great BBQ rib dinner on KIND OF BLUE, we said adios and headed north to British Columbia, Canada. We anchored at Genoa Bay for one night. It had been a long day and we needed naps. No sense sitting at a dock to nap, right?? 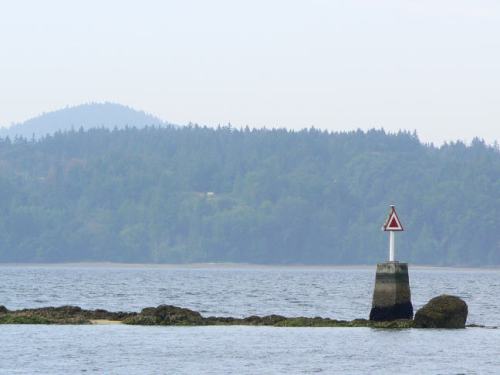 Take a look at the reef at the entrance to Genoa Bay. When we came in all you could see was  some of the sign rod and the sign and a tiny bit of what looked like kelp, but disappeared quickly. We gave the reef wide berth. This picture was taken at low tide. I mention it because the VHF radio has been busy all summer with calls for assistance for boaters who went aground. We don’t know if they don’t have charts, or don’t look at them, or don’t really understand where they are in regard to the charts. But we do hear it all and are quite disturbed by so many groundings and cries for help. We have witnessed, and cringed, when more than a couple boats took a short cut when entering Blind Bay. It was high water, but with a reef like that it is highly ill-advised to deliberately drive over a reef. 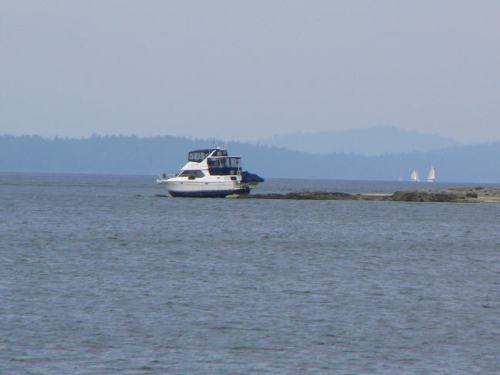 We don’t know if they know about the reef and are playing with fire, or if they are totally ignorant. Either way is very dangerous. And just as I am asking the Captain for a proper term I look out and there is a boat aground on a reef right here at Montague Harbor. Amazing!

We spent the next day in Cowichan Bay – “the town of a hundred little stores” – the guide book said. Well, there didn’t seem to really be a hundred, and it was the day after a major Canadian holiday and some of more popular stores were closed, but we still had a good time. There was a little market that allowed us to provision for the items that are banned from bringing across the border. Not very much and easy to replace – no problem. We quickly shopped at the Bakery the next morning before we departed. 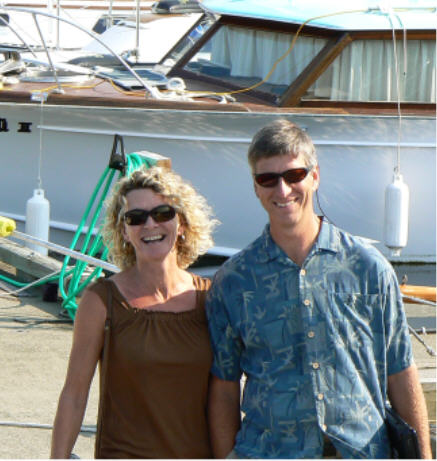 Our next stop was Maple Bay Yacht Club. This is a wonderful facility with great people. We are able to use our yacht club reciprocity and spend a couple nights there for a very minimal charge. Friends, Rob and Shannon, who we met in Mexico, live in the area and joined us for dinner the first night. We had a great time! The next morning Rob took us to a couple proper stores where I was able to do some more extensive provisioning. Thanks, Rob!

We were in Montague Harbor, Galiano Island, BC, yesterday. We have anchored here many times. This harbor is quite large. Last summer we came in and I stopped counting at 107 boats! There aren’t that many this time, but there are plenty. Montague Harbor 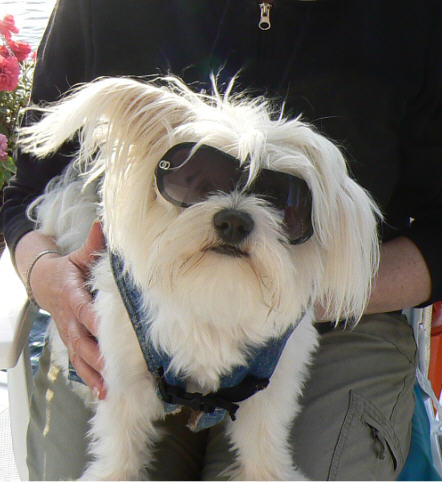 offers some of the best protection from most winds in the entire Southern Gulf Islands. And that is why we are here. The winds are piping out of the SE in the straits and channels and we are sitting safe and sound at anchor. The island has some great walking paths that we usually enjoy. On the westerly side there is Sunset Beach that we walk to. And, yes, it is named Sunset Beach for a great reason, as you can usually enjoy beautiful sunsets. There is an anchorage on that side of the island, which is fine for the winds we are having and there are many boats over there, too. We met Clooney last night. He looks like someone who ought to be famous. Right?

We pulled into Ganges on Salt 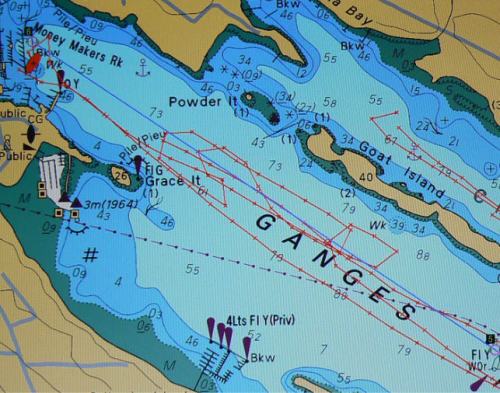 Spring Island, this morning. Our slip was not available so we had to stand off waiting. I call this picture “The Geometry of Waiting”.  Notice our red track of round and about.  Ganges is my favorite spot and I would feel cheated if we didn’t go there at least once every summer. We are planning to cross Georgia Strait when the winds die down, in a couple days, and rendezvous with friends in the Vancouver, BC area. It should be a great time. Just wait ’till I tell you about it and other Places We Go!