Really. I had expected to continue the blog in quick fashion, but something happens when you are having fun! I mentioned at the end of the last blog that we were headed across the Strait of Georgia to Vancouver, BC. We hadn’t been to the city in four years, and we were looking forward to seeing friends. We intended to anchor in Silva Bay, then cross the next morning, but the anchorage was chock full, the strait was flat and so we crossed a day earlier than plan. 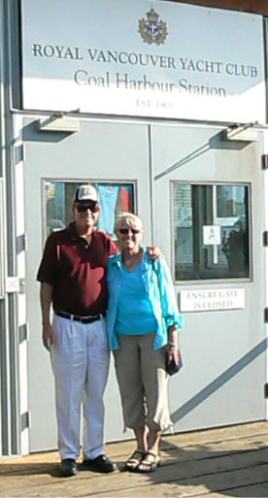 Our reservations for Royal Vancouver Yacht Club (RVYC) didn’t start until the next day, so we went into False Creek to anchor for the night. The anchorage is free and a boat can stay for two weeks total per month. In order to anchor you must have a permit. The permit can be obtained from the False Creek Yacht Club (FCYC), or a kiosk at the head of the harbor. We didn’t know about the kiosk so we tied up under the Burrard Bridge (only place available) to pick up the permit. This is one of the times when a picture would be just TOO much information. The underside of the bridge is loaded with cormorants, pigeons, gulls, oh and who knows what other birds. We walked fast to get away from the bridge to the office of the yacht club. We weren’t there more than 15 minutes – oh, the havoc those birds caused! Poor DESERT VENTURE was blasted with bird doo! It took the captain about an hour to get rid of the toxic stuff. We had intended to come back to the FCYC for a reciprocal night in order to enjoy the area ashore. After the mess the birds made we had no desire to get a night at the docks. The next morning we departed False Creek and headed to Coal Harbor. 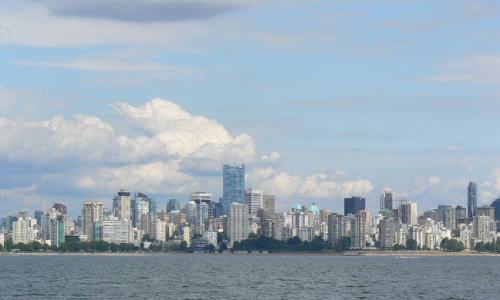 Vancouver is a beautiful city, with bridges, high rises, automobiles, and people. The traffic is monumental – whether by foot or automobile. The locals and tourists flock to the waterfront for walks and photos and to get to favorite restaurants, shops, events, etc. The city is busy preparing for the Olympics and there are signs of it everywhere. They are building an underground train system that has seriously and detrimentally affected the city’s traffic patterns. The local folks never know from one week to the next if their favorite route to a destination will be available or not. And the poor tourists, I can’t think a driving map would do them much good in certain parts of the city. Thankfully for us, we either walked or friends drove us around showing us the highlights of their city.

Our assigned slip gave us a front row seat to Coal Harbor. 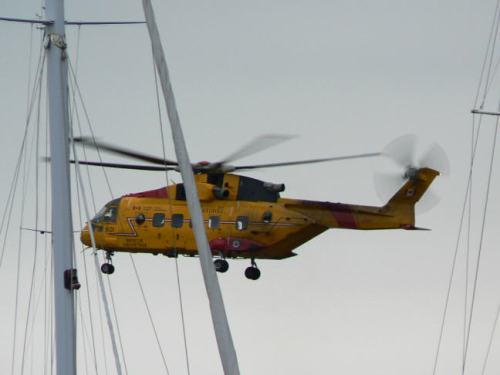 The waterway is very busy with sea planes, charter cruises, water taxis, and small pleasure boats. About 0700 the first morning we woke to the commuter seaplanes revving and taking off. One particular plane just wouldn’t leave and it was making a good bit of noise. I commented as to why it didn’t just leave. A couple moments later, Bruce said, “that is not a plane! I know that sound. That is an H3 US Navy type helicopter. A sound I have heard hundreds of times.” And, sure enough, it was! It was the Canadian Coast Guard helicopter waiting to take off.

Our friends, Bruce (R) and Ida on m/v TENAKEE, who we met last summer, assisted us with the RVYC moorage. That evening they came down to the yacht club and dined aboard D/V with us. They brought their very special friend, Hailey, who is ten and very grown up. It was great to get to visit with them. Hailey’s father, Neil, arrived to pick her up just as we were finishing the main course. Since there were leftovers (imagine that!) we made him a plate, and visited while he ate, then we all enjoyed a wonderful dessert. Any dessert in the summer that has fresh berries as the main ingredient is always delicious – right? 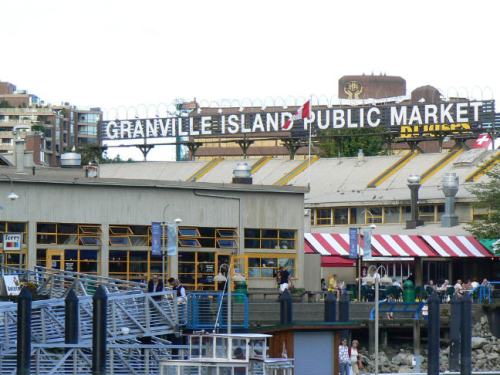 The next morning our friend Sharon picked us up for some sightseeing around the city. Much of the details included the huge impact of the Olympics upon the city. It seemed evident from most of the locals that they will be very happy when the grand event is over. To add to the stress of it all weather forecasters are saying there may be no snow – and what is the winter Olympics without snow? There are some very nervous planners working furiously.  Granville Market is a world famous tourist destination. In fact, friends said it is the second most popular tourist spot in all of Canada – Niagara Falls being the first. I would be hard pressed to debate the issue since the day we went to the market there was such a crush of humanity it was almost impossible to shop. In fact, we just walked through and escaped to a little coffee shop and visited. I read in a boating cruise book that Granville Market is much like Pikes Place Market in Seattle – only more polite…I think I might have differed with the author on this particular day. Our friend, Sharon, kept saying “don’t buy here, I’ll take you to a better market”. So, I listened and waited. She took me to a wonderful little local market in the Italy section of the city. A little Italian market that had everything I really needed and more. Prices were very reasonable and the atmosphere was very local and much more fun. You should have seen the cheese case. It must have been 60 feet long and full of every kind of cheese you could imagine. Wow! 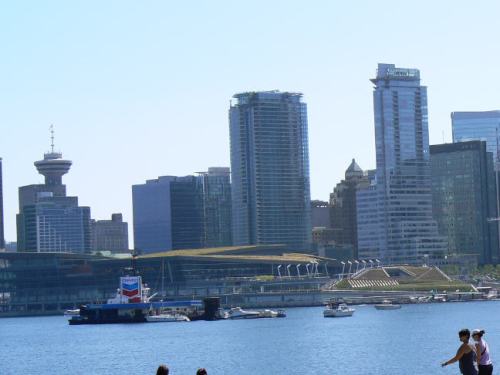 We left Bruce off at the Vancouver Harbor Vessel Traffic and Canada Coast Guard Radio Center in downtown Vancouver. Our good friend Bruce R, who works for the Canadian Coast Guard in the Vessel Traffic and Coast Guard section gave Bruce a tour of the facility. My Bruce (so many Bruces all of a sudden!) was very impressed. Though he had talked to vessel traffic centers all over the world over the years, he had never been in an office. Thanks, Bruce R for the great tour.  (Note:  The round spire building is the Coast Guard Center and the building in the foreground with a grass roof (yes!) is the location for the opening ceremonies of the 2010 Olympics.

After we picked up Bruce, we headed over to an Asian 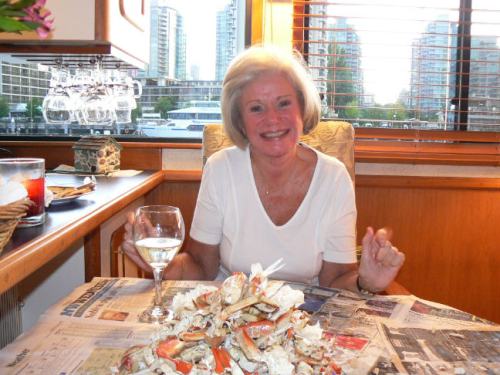 Market that Sharon mentioned and purchased crab for a three person crab feed. Bruce and I both agree that crab must be the best we have ever tasted. Great shopping idea – Sharon!!  The next day Sharon picked us up for an early dinner at a Japanese Restaurant. YUM! It is fun to eat our favorite foods again. We had pretty much eliminated all “fun” foods from our diet while Bruce was sick, not knowing what was causing all the problems. We sure have been enjoying some fine dining lately. And no fear and no problems. Yeah! 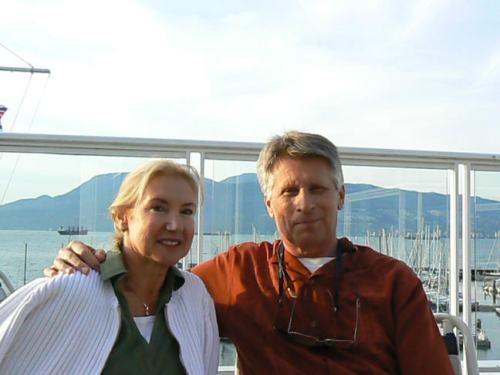 And as if we hadn’t already had plenty of fun, Ida picked us up the next day and took us on a driving tour of their side of the city – West Vancouver. Very lovely and much more in my comfort zone. Traffic, though busy seemed much more doable. We enjoyed visiting at their home, too, then it was off to the RVYC at Jericho Park, where Bruce and Ida treated us to dinner. Once again very fine friends sharing good food. 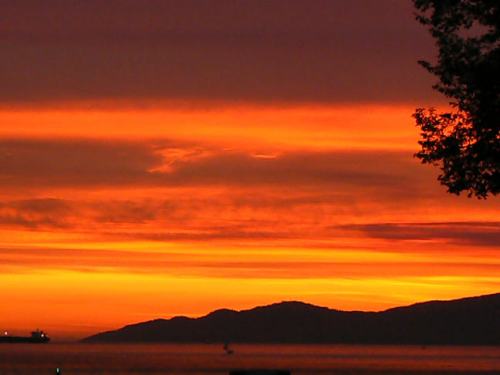 Another wonderful time. Thank you!!

We spent two days up Indian Arm, about 10 miles from Vancouver’s city center, waiting for weather. One side of the arm felt like wilderness and the other was peppered with fine waterfront homes. We were the only “big boat” there. The weather was idyllic and we relaxed and rested up from all our city fun. There were a lot of small boats that came in for the day. It was perfect weather to enjoy away from the city.

We headed back across the Strait of Georgia to Maple Bay for a small Mexico boater reunion. It 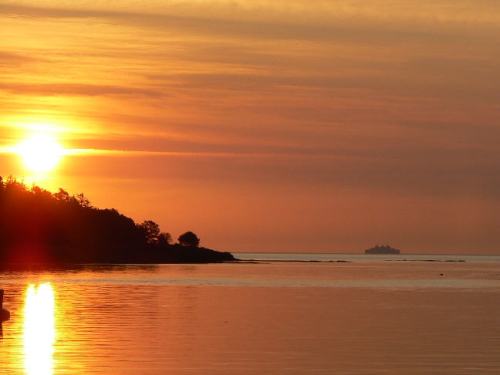 was very brief, but great to see good friends. The sea conditions did not reflect what was forecasted. By the time we got out on the strait we had done almost half the trip, as it is only about 17 miles where we were crossing. The conditions were messy. No huge waves, but the irritating four foot “square waves” we don’t like. If you remember, that is a four foot wave every four seconds or so. We both agreed we didn’t want to go back and start over the next day, so we forged on. We got some salt spray and we pretty much just kept to our seats. Fortunately, it was only a little more than two hours; and the good part is that it was done. We anchored for the night in Silva Bay and rewarded ourselves with a brew and some appy’s at the pub. After meeting up with friends we headed back to the US. Three weeks went fast!

Standby for the next addition to the blog where you find out where we are Home Today.