Hello from Newport, OR.   We departed Eureka, CA, at 0800 on April 25, 2008.  The forecast was for a much calmer ride than the previous trip into Eureka, CA.   We delayed an early departure in order to avoid the majority of the ebb.  Huh?  The ebb, again??   When we reached the Humboldt River Bar, there was a one knot current heading out to sea. One of the aspects of river bar crossings, to take in consideration, are the sea conditions at the time.   Transiting a river bar at the beginning or end of the ebb is not that significant an action by itself – if the seas are flat or down.  However, if there is any significant ocean swell or sea running toward the bar entrance at any point in the ebb cycle, you will most likely encounter a “heaping” up of the conditions where the outgoing ebb current clashes with the incoming seas. When this clash occurs, dangerously high breaking waves occur in the navigational path of the vessel.

We really enjoyed our trip from the marina out to the river bar, going with the tide, it was an easy nine knot ride.  Nice.  The influence of the ebb reaches out for over a mile into the ocean.  We had a bit of a ride, but really was nothing to speak of.  In fact, as we were traversing this area, I thought to myself, “I could do this for awhile –  it isn’t bad.”  It lasted for a about an hour, before we were able to make that right turn and head north.   The seas had layed down nicely from the storms of the last couple weeks, with just a slight ripple, and it was a comfortable ride.   We immediately started the process of dodging crab traps.  Once we got out past the river bar/ebb influence and headed north, I went back to the galley and prepared breakfast.

Eating, while underway, is important to crew contentment and energy levels.   We try to keep things very simple when voyaging.  Conditions, though we try to keep them boring, don’t lend themselves to complicated meals.  We really want food that is quick, easy, and filling.   I make sure we have boiled eggs.  Our breakfasts often include two or three kinds of fruit, a boiled egg, and toast or bagel.    Later in the day I can  make  tuna and egg salad for sandwiches, or add some boiled egg to a salad for a little extra flavor and protein.  I always have good sliced deli meats, and most often we share a sandwich, fruit, and some chips for our lunch.   The night or two before departure we generally BBQ a double batch of chicken.  Our underway dinners generally consist of BBQ chicken, rice, and a vegetable – a sort of chicken rice bowl.  They are very filling, quite easy to assemble, and we like it!   There is nothing like doing isometric exercises constantly to make you always hungry, so I have plenty of snack crackers, popcorn,  energy bars, etc., for an in between or mid night snack.  Unlike the sailors who go for days on end, and have midnight dinners, neither of us really wants much to eat in the night.  One of our favorites is peanut butter pretzels.   We drink a lot of water night and day.  And, last but not least, no self respecting boat goes without several options in chocolate – that is the ultimate pick-me-up comfort food.

Neither one of us tend to be seasick, but Bruce and I always take a half of a generic Bonine, when we get up on day of departure for an ocean voyage.  Generally, if we were to feel ill we think it would be in the initial getting underway and getting past the influences at the harbor entrances.  Neither of us has actually been seasick.  But we don’t take a chance, since it is not in our best interests to have either one of us go down sick.  We like Bonine as there seems to be no inconvenient side affects, like making us drowsy, when we really want to be alert.  If a person is likely to be seasick, they should take their remedy an hour or two before departure, and they really should not start out on an empty stomach.  All that being said, we generally have breakfast after we are well on our way.

We are doing a coastal ocean voyage, but this is not our normal cruising mode.  These voyages are strictly for getting us from one cruising area to another.  If weather cooperates they are short lived.  Since we are traveling on the cusp of the season change, weather patterns are unsettled, and so we are finding ourselves hopping, as far as the weather window allows, from one port to another. We prepare quite differently for a voyage like this compared to our more traditional cruising in protected waters.  Though what we do is significant to us, our voyages are “infant” compared to the cruisers who cross oceans.  However, doing ocean coastal cruising still requires proper planning and preparation of the boat and crew.  Properly functioning electronics such as GPS and Radar, with all the necessary navigation charting are critical to a safe passage. After all, instead of having the entire ocean before you on a ocean transit, we have the entire west coast of America that we must avoid, navigating the coastal waters.  Being able to understand weather forecasts and plan voyages is critical to the quality of the cruise.  Though boats and crews can withstand a beating in rough weather and seas, and some may even enjoy the challenge,  the captain should know exactly what it is he is expecting of the boat and crew.  It should be understood that having a well maintained and fully functioning mechanical/engine space is a necessity, too.

Our night cruises are minimal, so we never get into a rhythm, as they are short lived.   It takes about four or five days – constantly underway, for a crew to settle into a rhythm  where their internal clock is working for their shift.  The first couple days (and nights) are pretty tiring as everyone is adjusting to the movement of the boat, their own internal clocks, and the noise of the ocean and/or engines.   Since we rarely do more than an overnight at a time, we never settle into an organized watch.   We make sure we both get naps during the day and evening, and we spell each other, as the on watch person needs.  Occasionally we have another crew person on board.  He is a professional watch stander, and a night owl.  We really love it when he does a transit with us.   Everyone gets their proper rest.  We have a sectional sofa in our salon. It serves as our sleeping berth when we do overnight passages  It is as comfortable as it gets when on an overnight passage.  And, importantly, we are within calling distance if a need arises.

Though the autopilot is “driving” the boat, someone is standing watch at all times.  We are the ones who set the course, manually making course changes.  It keeps us very alert to where we are and where it is we want to go.   We do depend on the autopilot and the GPS to talk properly together, keeping us on our determined course.  In addition, we have our radar running.

It gives us a great  satisfaction and confidence when the distance to a particular landmark on the charts (as determined with our GPS) is the same distance to the hundredth degree as noted by our radar.  It was a surprise, to one of our friends, that we plotted our course to run between Point St. George and the St. George reef.  Since we have been through there on more than one occasion and was familiar with the area, and since we had full confidence in our GPS and radar, we were confidant  as to our route.  It saved us many miles and hours, but it was only due to our personal knowledge, confidence in our electronics, and the expertise of the Captain that we made that choice.  Expediency is never a reason for such a choice.  [The red “x’s” is our track.]

There was a little wind out of the NW for most of the first day.  As soon as we rounded Cape Blanco, it died down (as we cleared the micro weather climate of the cape) and we had flat seas the rest of the trip.  The half moon rose around 0230 and was a welcome sight.  The moon was waxing.  In other words, it was building toward a full moon.  After the full moon, it will be waning as it fades away.  There will be a full moon on May 2, 2008.   Our navigation charts have the tides and currents embedded within them, so we can tell at a glance what the current and tides will be for any particular location.  It also tells us time of sunset and sunrise, and the phases of the moon.  How is that for having an almanac onboard?

Our voyage was so comfortable, we found ourselves with a lot more energy and time on our hands since we weren’t busy hanging on or bracing ourselves.  It meant we had time to do crossword puzzles, read, check out our next destination via the internet, and various other activities.  It was a very nice ride – the kind we enjoy the most.   We saw little in the way of wild life on this leg.  There were few birds, and only one sighting of whales blowing in the distance.   We did have one surprise.  I went back to the galley in the late afternoon to clean up the galley, in preparation for dinner.  There in our wake was a huge pod of dolphins jumping and leaping and having a great frolic. 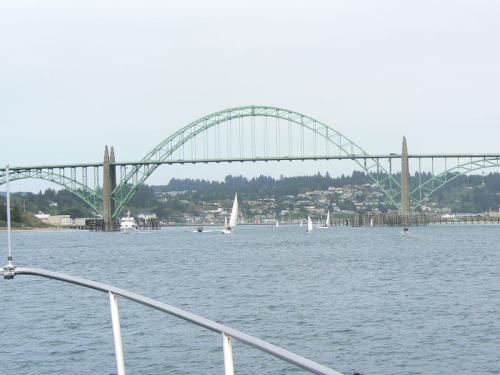 Our arrival the Yaquina River bar, at Newport, OR, was perfect timing.  Conditions were perfect, arriving at the full flood, with a light breeze.  It was a very nice welcome to Newport, OR.

The fuel dock was closed so we went right to the transient dock, as directed by the harbormaster, and tied up.  Though we were tired, we were in much better state of being than our arrival in Eureka.   While the captain washed the salt off the boat, I registered us at the marina office and set the house to order.   Once all the normal chores were done, off we went to the Rogue Brewery for a pint and some wonderful halibut and chips.  It was an early night for us.  We were very happy and content as we drifted off to the peace and quiet of Newport Harbor.