Spring is definitely here in Portland. Yes, we are still here! However, with spring in full swing, it is a pretty place to be.  The trees, shrubs, and flowers are all in some stage of beautiful blooms – some bloomed in February!

Nature is busy bursting with spring, on the water, too. The captain has been in his element attending to all the ducks and domestic and Canadian geese that are working the social welfare system to the max. I don’t know how much sour dough and 12 grain bread he has spread on the water, but the birds are constantly on the lookout for his appearance.

There is one mallard couple, in particular, that never gets far from our boat. They have become totally spoiled. Though I don’t consider myself a hard heart, I do not participate in feeding the birds. I think they need to fend for themselves. Also, they become so eager to let us feed them they start living on our swim platform – which becomes really messy. And now, the female has become so brazen she has started hanging out on our main deck. In fact, now that the weather is so mild and we are leaving the doors open, she just walks right in! I can hear her coming; she has the little “cluck cluck” which is her “Oh Captain” call. She knows he thinks it is cute that she comes in and she knows that I do not. So, depending on which of us comes upon her, she will either come further into the house, or head back out to the deck, and further if I keep herding her off the boat. She never takes her eyes off me. I would never harm her, and do speak gently as I don’t want her freaking out and flying inside the house. She is just never sure how serious I am about her being on the boat – silly her! I am very serious. 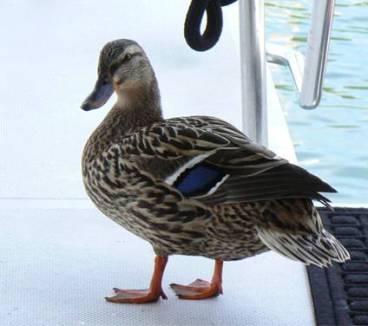 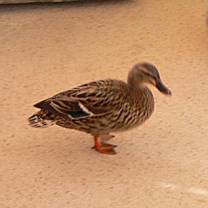 Mallard in the Salon

This morning we were blessed with a great flotilla of Canadian Geese. It made me think of Easter Sunday, everyone in the best attire, very proudly skimming through the marinas showing off their finest – new babies! The goslings were escorted by five, very watchful adults – the one in the lead gently clucking to the little ones to keep them coming along. 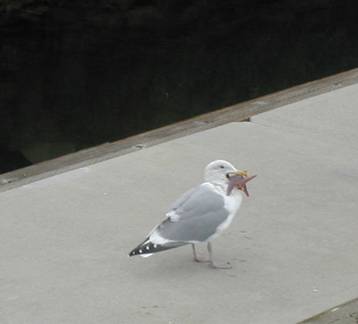 This gull was a resident at our dock in Alameda, CA, a few years ago. He fished off the docks astern of us. Our boating neighbor was a crab fisherman. He would sort through his catch back at the dock, tossing the small crab and starfish back into the bay. The gull lived for this fisherman’s rejects. He introduced us to a method of dining we had not seen before. I watched intently the first time he grabbed a starfish out of the water. I couldn’t imagine what he would do with it. He started poking at its center while it was on the dock, finally getting the starfish in his beak with all the tentacles pointed out. And then, through a series of manipulations, the starfish was taken into the gull’s beak – disappearing in one huge GULP! Just like that – and it was gone. I still get all “choked up” thinking about. Since that first introduction, we have seen many a starfish meal consumed by a gull. It is still amazing to watch, much like the Great Blue Heron on Christmas Eve, that I posted to the blog – nature at its best.   The egret was another one of our dock neighbors in Alameda.  It fished from the same waters where the gull did his foraging.

I know you are all wondering about our cruising plans. Yes, the birds are nice – but what are we doing this cruising season? I will address this in more detail in another post, but we are ready to go – just waiting on a weather window. There was a moderate window last week, but Captain chose to wait for something less animated. We will make our departure early this week, heading – on a slow bell – down the river.

Weather is checked numerous times daily at several sites.  It will not be long before we are officially underway, and on to our 2010 cruising season.  Meanwhile – we are still Home Today – at the dock.