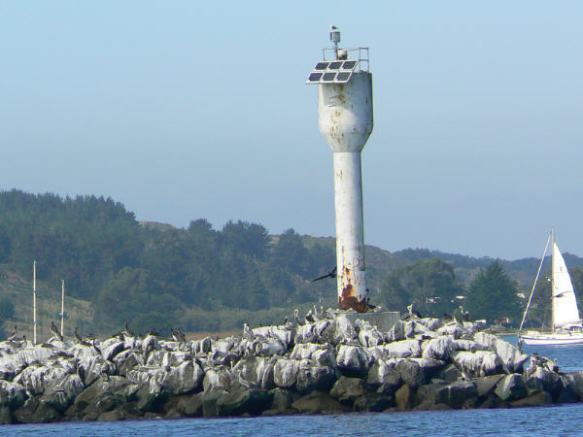 Our first day out was a success. We arrived in Half Moon Bay at noon, as planned.

There was one little hitch in the voyage for me. I have never suffered from seasickness. And, to fend off the rare potential occasion, we always take a half Bonine to protect us. And that day was no different. We always nibble as we get going, and then later in the morning I fix our official breakfast. Lately, that includes precooked bacon, for the captain, that I microwave. Wow. The odors of the bacon totally set my stomach churning – long after we crossed over the big ship’s wake, dealt with the light animated sea state, and took the seas on our port quarter making our turn south.

By the time the bacon got zapped we were well into a perfectly acceptable day. I tried to fight it off, but I finally told Bruce – who sent me below to lay down in the last half hour of our voyage. I thought that sort of silly since we were almost “there”, but he insisted. I immediately felt better, and by the time he throttled back at the harbor entrance I was feeling much better. And now, bacon is off the menu on voyage days. Whew!

We anchored in a different spot than usual in Half Moon Bay. We may have discovered why not many boats anchor there. Talk about dirt – or mud! Bruce had to use the boat hook as a shovel to scrape all the mud and sand off the anchor.

The day started off normal for a Pacific coast morning – with a marine layer – though we had plenty of visibility. The sun finally burned through mid-day. It was a beautiful day on the water.  I never get over the glorious blue of the water.

Thanks to all the friends who wished us fair winds and following seas. This is the perfect photo of just that.

Our cruise to Monterey was a safe and simple voyage. It was 8 hours long, with us averaging just over 8 knots an hour.

We passed this research buoy on our way into Monterey. Talk about hi-tech!

This made our third visit into Monterey. On one visit we were assigned the slip below.

This dock is the star of one of my docking stories since 2006. The wind pipes down through the slipway and the wind is right on our beam as we back into this slip. The wind pushes the boat off the dock, so I have to move fast to get secured at the stern then dash forward to secure the bow. On that particular day a salty looking sailor, standing on the dock, offered to take my stern line. Since we had the wind against us it made sense to let him assist. After all he was salty/sailor looking – I thought. I handed him the line and told him “just wrap the line” and pointed to the cleat. I ran forward to grab the bow line. The captain (who never yells) yelled into my ear, “what the heck is going on down there?” (Well, he didn’t say “heck”, but you know what I mean.) Huh? I thought everything was under control. Not! There was the “salty” guy holding the line and the stern was moving away from the slip. What part didn’t he understand? I turned to him, pointed at the cleat, and said, “The captain thinks that line is secure!”. He immediately secured the line. <sigh> Bruce got the bow back in line via the bow thruster and I secured the bow line.

I learned a couple lessons that day. First, don’t trust salty looking guys to know what to do. Second, don’t expect sailors to think a lady knows what needs to be done. Since that day I rarely give the stern line to anyone on the dock. I invite them to take the spring line (mid-ships). That way, I know the boat will be tied securely aft and I can get around the spring line to the bow to finish securing the boat. And if I do have to hand my lines over to someone I always preface my instructions with “the Captain wants…”.

So here we are in Monterey, CA. We stay here until Monday morning, when the weather lets us get underway.

Monterey to Morro Bay is one of our longest voyages headed south. It is about 100 miles. Our goal is to make Morro Bay in daylight, so it will be an early get-up. If the weather is nice we may detour for a night and anchor along the coast at San Simeon.