We were at an interesting crossroads.   Along the Oregon coast, just a few dozen feet to the south, we got an occasional freight train.   It was dark the first time one went through, and though I KNEW I was not on the tracks it sure seemed too close for comfort!  Just a few minutes ago another train coasted by, the engineer waved and gave us a thumbs up. 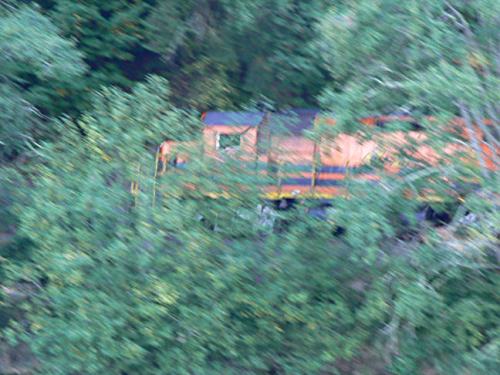 The last couple days we had a lot of ski boats racing past pulling a buddy or racing to a favorite ski spot.   And while they are passing at high speeds we can also hear the sounds of some kind of race track coming from the Washington shoreline, in Longview.

We have a good view of the main channel, though there is a little island between us and the Columbia River, and there is a steady line of huge ships and tugs and barges coming and going.  As they head up the river you can see their entire waterline, as they are empty and riding high.  Those on the way down to the ocean have no waterline to show, as they are loaded to the hilt, with different products. 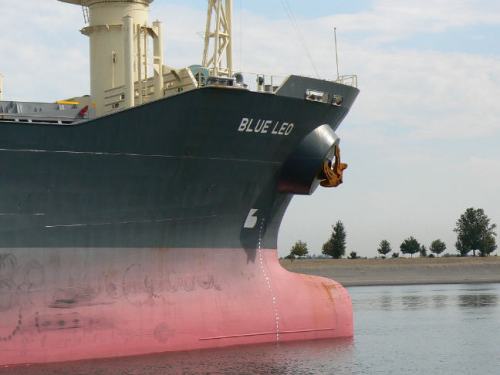 This blue ship is a car carrier and has unloaded SOME of its Honda Automobiles. It is headed down river to the sea.

And just over on the Washington shoreline is the highway that takes you along the north side of the river, so we can see and sometimes hear every kind of conveyance you can think of – motor cyles, motor homes/rv’s, trucks, cars, etc.

There is civilization very close by, though not obviously so – we can see some of the city of Longview from the boat.  And yet, one night at about 10.00 p.m. we heard the distinct howl of coyotes all up and down the river banks and on the island talking to each other.  Believe me, these were not pets that were making those sounds.   In turn, I tried my hand at howling with them.  Not one of them replied, but I did get a response from a blue heron and a duck…hmmm, I wonder what that means…never mind!

We are hanging out in fresh water, which is a big change from all the salt water that has been under our keel the last few years.  It didn’t take more than a few minutes for us to be reminded of the differences.  For instance, do you know there are few bugs on salt water – at least if you are anchored away from shore?  Well, bugs have no problems with hanging out in the middle of a fresh water river, and seemed to have enjoyed having a nice motor boat to lurk around – Get!  Get!!!  Darn bugs…get!!!

Finally, it was time to haul anchor and head for the city of Portland and the dock.  We enjoyed our trip up river, making way for the ships and the fishermen that were all along our way.   Though it was a week day, there were a lot of fishermen out on the water that day.  This is just one group, positioned at the mouth of the Cowlitz River.  We assume they are there to catch salmon on their way “home”.

The Oregon State Marine Board is to be applauded for the wonderful use of their funds.   They have created marine parks throughout the state, where boaters can tie up at no charge.  There is no water or power, but it gives boaters a chance to tie up rather than anchor. 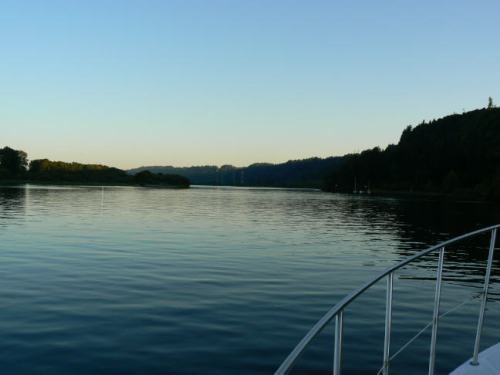 Some docks are “free standing” in that there are no shore facilities, and others give access to an island, where boaters can hike, picnic, and even use basic facilities.  This picture was taken at anchorage.  If you look closely, you can see sailboats out in the distance.  These boats are tied up to a Oregon State Marine Park dock.

We tied up to the Sand Island Dock, across from the city of St. Helens, several years ago.  It was a wonderful dock then, it still is, and the board has added an entire additional set of docks since we were there last.

We had to contend with one  bridge, the Railroad Bridge, on our way to the dock, as we avoided the Willamette River. There are multiple bridges on the Willamette River.  Anyone that has driven in Portland can tell you all about the bridges.   All we needed to do was drop our VHF antennas and we were clear to pass under the bridge.

We motored though North Portland Harbor  enjoying the houseboat community.  This was one of those time that we were more interested in our surroundings than photographing the locale.  There are many shapes and sized – anything to have a waterfront home.  Finishing up in the harbor, we passed the eastern tip of Hayden Island and reentered the Columbia River and downstream a half mile and entered Hayden Bay.  We tied up there for three months.

And this ended our 2008 cruising season.   We had a long check off list waiting for us when we tied up to the dock, as always after cruising for almost six months.   Though we can run for many months at a time, sooner or later, we have to stop and do all the things that everyone else does.   Most of the list has been completed. DESERT VENTURE is ready for the 2009 cruising season.  We are more than ready to let go the lines and be underway, cruising all the beautiful places of the Pacific Northwest and Inside Passage. We looking forward to seeing our boating friends out there on the water.  We are down to just a couple important items and the list will be complete.   Once those are done we will start looking for a weather window.   We just can’t wait to get out there cruising!

1 thought on “Places We Go – Boats, Trains, Planes, Automobiles, and…”