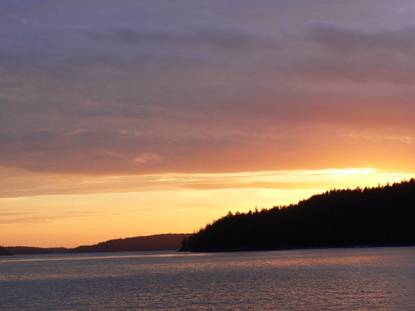 We left Bremerton, a week ago, after ten very busy and productive days. Ten days is a long time at the dock in summer. Correction, it SHOULD be summer, but the weather was not all that summery. Once again, though, it didn’t keep us from our plans, and there were a couple glorious days tossed in among the ten – perfectly timed beautiful days at that!

It is easy to complain about the weather – everyone is doing it – but it doesn’t change the facts. I got several emails after my last posting suggesting that I glossed over just how wet and cold it was – but I did say it was wet – right? I am at the top of the list of people who are more positive and cheery when the sun shines, but that doesn’t mean I get to stop and go hide under my binky! I would miss out on fun and exciting adventures – so we keep going.

As full-time cruisers we know that we can’t waste opportunity. There can be no “later” or “tomorrow” when it comes to decisions. Most likely we won’t be here tomorrow, or our plans won’t get us back to this moment. So the general philosophy is “strike while the iron is hot”. So, we go regardless of the weather if it is related to shore side projects. By now you know it is just the opposite of going on the ocean with DESERT VENTURE. We only go with the weather!

And go we did! We left Bremerton at noon and rode the ebb current all the way to the northern tip of Admiralty Inlet, and just as the ebb changed to the flood, we caught the flood up into the San Juan Islands. We had a following current and wind the entire voyage. We cruised at 1600 RPM for all but the last hour, when we kicked up to 1800 RPM in order to be able to anchor before dark. We averaged about 9 knots – which made for a very nice 73 miles voyage. Our initial plan was to stop in Port Ludlow, a 40 mile cruise. But, why pass up a free ride? We knew that we wouldn’t be able to cross the Strait of Juan de Fuca for a couple days if we stopped in Port Ludlow, too. It was a pretty boring ride for the most part. We did have some beam seas crossing the Strait. We had a couple casualties from small items that weren’t secure, which is very rare.

When I said “boring” I referred to the water conditions.  We had never been down that side of Admiralty Inlet, so we got to see new waterfront property.  The islands are all beautiful.  With all the rain everything is green, too.  We are constantly amazed by all the homes along the waterfront in the Puget Sound, San Juan Islands, and Gulf Islands of British Columbia.   Very interesting landscapes entertained us as we cruised along that day.

Blind Bay is well known for its sunsets and the night of our arrival was no exception. The sun started setting as we were approaching Blind Bay. Photographing sunsets is like photographing an action figure. You can’t keep up with the beauty that continually evolves. Every moment through the setting of the sun on a perfect evening is spectacular and deserves its own story. I took over 20 pictures and each one is beautiful. Sunsets have such incredible moving color, that if you saw a painting depicting the same colors you would think it was surreal. You would assume there was artistic license taken. The only way to know the truth about sunsets is to watch as many as possible. Saturday night’s sunset was brilliant. My camera didn’t begin to do justice to the evolving sunset, but what it caught is still worth enjoying.

We managed to get in and anchored by the time I took the last photo. It was a beautiful night to be on the water – At Home Again- In Blind Bay!