We spent a couple days resting up and recovering from our overnight voyage from Newport, OR. While we did a thirty hour trip, S/V ANN LUCIA did about 40 hours, being a sailboat that travels slower. We were all very happy to see them pull into the harbor. They left at 2000 the night before us. We caught up to them around 0100. They arrived Eureka around 1700.

We are staying at the Woodley Island Marina, across from downtown Eureka. It is predominantly a commercial fishing center, so we are surrounded by commercial fishermen. Tuna is the catch of the day and they are having a huge success. Sylvia tried to buy fresh tuna off a commercial boat in the marina. They had just run out, saying it would be a few days before they had more.

Friday, after we were all rested, we rented a car and did local shopping. As always, there are boat parts and provisioning needs. We took care of the necessities so we could play on Saturday!

Redwood National Forest here we come! Before we could leave the marina, the lady off the tuna boat from the day before, came bearing several pounds of top grade tuna! She gifted it to Sylvia, and she came running to DESERT VENTURE, wondering if we had room to store it until it could be divided among us. Yes! 🙂 We all had visions of tuna for dinner later that night. Meanwhile it was time to load up and head north to the Redwood National Forest, and specifically Jedediah Smith Redwoods State Park. We had been before, but we were every bit as excited as Ken and Sylvia were to see the trees for the first time.

We stopped at the Trees of Mystery and hiked the trail and rode the Sky Ride. Please check it out at http://www.treesofmystery.net/trees.htm. There are some great pictures that I was unable to capture. The trees are enormous and it’s impossible to get a complete photo from ground level on the trail.

My photography skills were challenged. The forest is shaded with a canopy of limbs and leaves hundreds of feet in the air, and an occasional sun beam in just the wrong place! Walking through the forest, with its muted light, it felt as if we entered a place of worship. Our voices lowered in awe – it seemed fitting and respectful as we walked among the ancients.

The redwood bark is what protects and enables the trees to survive the ages.

We could see where some trees had been in a fire, with their blackened but intact bark. Some trees much older, probably sustaining more than one fire, fell victim. The idea that their bark can fend off the heat and flames is inspiring. We all probably need to adopt that for ourselves, not letting circumstance bigger than us destroy us. I could use a dose of Redwood Bark myself! 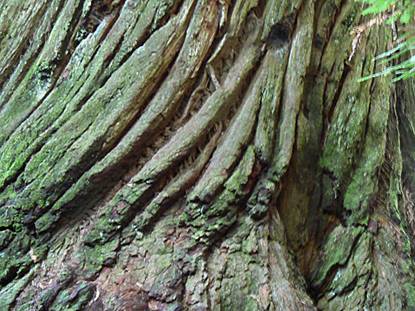 Ken poses (below) to give perspective to the size of this enormous tree. 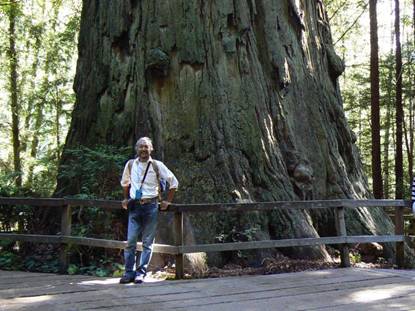 Have you hugged a tree today? 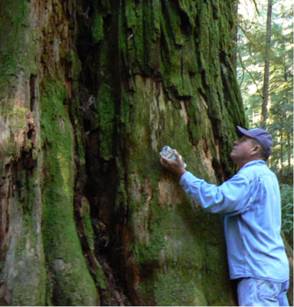 Being there and seeing still made it hard to fathom the size, age, and power of a single tree.

This was a relatively “small” tree that fell victim to fire and rot.

This is the largest “family” tree and is in the park we visited. Look closely and you can see trees growing from limbs! Amazing!

Nurse Tree – Though fallen and no longer living, the horizontal tree nursed the vertical tree to life and gives it sustenance. 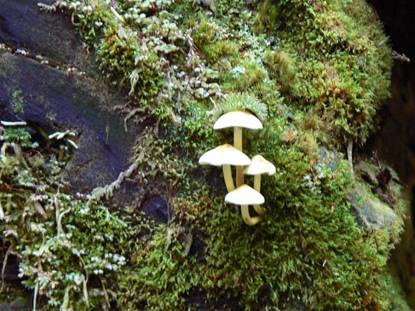 Fungus takes many forms and is essential to the continuing life of the forest.

This is the core of a fallen tree. Beautiful! Though no longer living, the tree continues to sustain life in the forest.

Bruce and Angie in the redwoods – one of the beautiful Places We Go!