First, a brief update on Bruce – He continues to improve regarding the pneumonia. We still have outstanding issues and a new wrinkle, so it seems one step forward and one back. However, overall he is doing better.

Our reservation started December 1, and here it was December 10, and we were still north, in Mazatlan.   We also had our favorite crew person aboard – my son. By this time Bruce had been out of the hospital about a week. The doctors agreed that he was fit to travel, so we got underway to get us to our winter destination and let our crew person get back to his life. 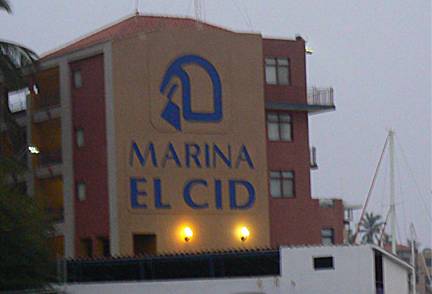 The voyage was about 180 miles. We did the trip in two day cruises. The first day was the longest. We departed Marina Mazatlan at first light, passing Marina El Cid on the way out to the Sea of Cortez.  So long Mazatlan!  Thanks for everything!  We’ll see you in the spring!

The plan was to make Isla Isabella before sundown – a voyage of just over 90 miles. If the winds and seas were with us, we knew we could make it – just in time. And, compared to our last cruise, the reports were perfect and so, too, were the conditions. There was a point in the day that there were turtles in every direction as far as we could see.  Amazing! And, though not as big as some we have seen, there were so many I managed to get a couple of good pictures. 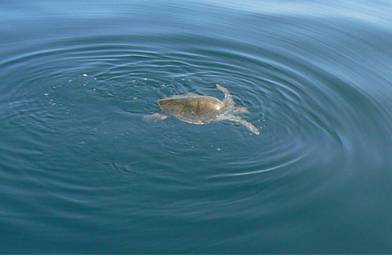 Sometimes our first clue to seeing a turtle was the bird “walking on water”!

It was a beautiful day. My son put out fishing poles, hoping to catch dinner. Our rails are a bigger diameter than the standard stainless pole holder so we don’t have traditional fishing pole holders. Since we aren’t avid fishermen, it wasn’t a problem for us.  But, being the industrious fellow that he is, Bruce came up with a home-made alternative!

It’s a little tricky to manage. You have to work fast to grab the pole before the fish gets away with your all your line – and pole! Also, they had to tie the pole to a stanchion as it wouldn’t always stand. Even trickier (is that a word??) freeing the pole and bringing in the fish. This is a perfect example of what a dedicated guy will do to catch a fish. Bruce and I love fish, but we aren’t diehards – my son is our resident fisherman. [Note: While the fishermen ponder our unique design, the rest of you can gaze on the beautiful water.]  The bottom line is it worked! We caught fish. On this cruise we caught two mahi-mahi (also known as Dorado). Though we landed them both, the first – and of course the biggest, managed to escape. Bummer!  However, we caught another one and it made for fine dining later that night at Isla Isabella.  Landing a fish on D/V is definitely a team effort, and we’re working to refine our game plan!

Isla Isabella is a National Bird Sanctuary managed by the University of Guadalajara.  The island is a rookery for Blue-footed boobies, Brown boobies, Frigates and many other birds. It is  major stops for cruisers.  If you’re fortunate to go there, you can walk along trails, passing in close proximity to white fluffy frigate chicks, blue-footed boobies, and their parents, and other types of birds.  Friends have rhapsodized on the wonder of the island.  Though we haven’t been ashore we can now say we were “there”. We arrived just before sundown, and it was obvious that the island was a bird sanctuary from our view. The sky was full of birds coming in to roost for the night (we assumed). If you have a bird phobia, you would have quaked at the sight! 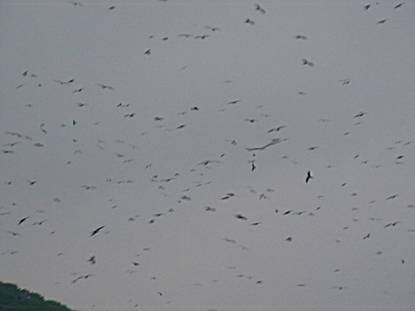 Though Isla Isabella is the island star, I was intrigued with the shape of the island just to the east of Isla Isabella – Los Manos . The first picture is looking south as we came from the north. I imagine a sea monster, with the long neck and head of a turtle, turned to stone. What do you see?

And this picture is of the “backside” of the island, the designated anchorage. For all you snowbound folks, that white stuff is not snow!

This picture was taken the next morning on departure. There were two other sailboats anchored, along with us that night.  We worried it would be animated and a rolly night of sleep, but instead it was a surprisingly quiet anchorage. Everyone, including our recovering patient, slept well.

The sunset that night was gorgeous!

This next day was a short one. Fishing poles went out first thing. We never got a bite, which was a big disappointment. There was no battle with nature, and no fresh fish on the table that night.

We intended to make it a shorter day, arriving in Punta Mita mid-afternoon. Once there and anchored we realized that it was not going to be a good night. There was a large swell rolling in, and the captain felt it would not die down in the night, so we moved on to La Cruz and anchored outside the general anchorage. It was a good decision.  We had a better night, and it put us closer to our final destination. The next morning we got underway – destination Paradise Village.

We plan early arrivals here because the winds pipe up around 1100 every day. Once in the the slipway the wind is abeam of the boat. Though boaters deal with such conditions, no wind is the best condition to have when docking. It makes a very boring and successful event. As always, this time was no different. Bruce brought DESERT VENTURE into the slip, and between our crew and friends on the dock, we got in and tied up. Finally – arrival at our winter destination.

Rest and recovery can begin. Or so we thought! As you read in a previous blog,  Bruce ended up back in the hospital over Christmas. Almost a month later now, he is doing better, and the pneumonia is resolving. He now has to regain his stamina and strength. It will be a long hard process that requires days of pool and beach time. Well, isn’t that what was planned for this winter, anyway? No problem!

Finally, now, I can end our Mexico Cruise in 2010! I’m certain you’re all happy to see that we made it safe and sound,are improving, and can move on to the new year. You can find us on “B” Dock! Stay tuned for more updates on Bruce and details on Living Aboard in Mexico! Meanwhile – we are At Home Today – in Paradise Village!