Happy Valentine Day – give away some smiles today!

Up until just the past week all our energy has been directed at getting Bruce well. All our outings were a result of a medical appointment in Puerto Vallarta. Because of his weakened state we took taxis to and from the city. It occurred to me the doctor’s prescription was “take two taxis and call me in the morning”. 🙂 Yes! We have been in a lot of taxis!

We incorporated a grocery and pharmacy run after each appointment. There are set rates, so we paid $180 pesos to get to the city and $200 pesos to get home. Basically, round trip – including a tip – was $38 USD. It adds up fast! The ride each way was about 25 minutes. That gave us plenty of time to visit with the taxi driver. What a wide and varied life they tell us about. We met Enrico, Jose, Pablo, Ricardo, Roberto, Jorge, and on and on. Between our limited Spanish and their limited English we communicated well. Our first comment to the driver is, “Hola. Habla Ingles?” And from there the conversation proceeds along. We ask for their names and they would respond in kind. It seems the American name Bruce brings images of either Bruce Lee or Bruce Willis. “Yeah – that’s me!”  says my Bruce.  🙂

This is a resort taxi. We get them at the main entrance to the hotel. Notice Bruce is nice and upright! 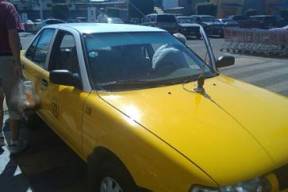 This is a town taxi. Without exception every town taxi has a rosary riding on the rear view mirror. Riding around in the city, with the crazy traffic, is explanation enough for me. All taxis are very clean. In fact, when they aren’t driving people around they are dusting and cleaning. One fellow in Mazatlan had a paint brush that he used to dust the vents on the dash. They take pride in their taxi.

While Bruce was in the hospital – both times – I took taxis to and from the marinas. I always felt safe and that the drivers were careful in their driving. When I left Cornerstone Hospital in Puerto Vallarta, I walked across the street to Soriana Plus – a major shopping center in downtown Puerto Vallarta. A huge fleet of taxis wait in and around the shopping center for work. As I left the first night I saw a taxi coming down the street toward me. The driver waved at me, and I waved back, and that was my first taxi in Puerto Vallarta. Though it is a city taxi they all know about Paradise Village. They can’t pick up riders in the resort, but they can deliver them. Of course I asked if the driver spoke English. This driver is the only one that spoke no English – at all. But he knew Paradise Village and so off we went. Well, we got lost in the resort. I realized that we weren’t going in the right direction and said, “Senor” to get his attention. Then, in my best pantomime with him watching in his rear view mirror, pointed behind me. It worked – what can I say? He realized, too, that he had missed a turn. He was very apologetic. Though I speak very little Spanish I can understand more and I understood his sentiment. He was very apologetic. “No problema, no, problema”, I said. No problem, we are on the way now. This man was very quiet (imagine how hard that is for me??) but he was obviously careful and caring. I felt it was partly my fault that we got lost, so I doubled his tip. I didn’t want him to feel embarrassed or bad that we missed a turn. And, I was home safe, sound, and very grateful!

Next night, I walked out of the hospital, saw a taxi parked across the street. I waved and he drove away! Huh?? But then here came another taxi, he saw me and pulled across the street and…Senor!!! It was my taxi driver from the night before. He is now my amigo! It was comforting, though we still can’t communicate. He told me not to worry, with a grin, he knew the way. And, of course, he did! Now, fast forward to a week after Bruce was released from the hospital. We had finished our doctor appointment and shopping. We came out of the store looking for a taxi – and yes – you guessed it – Senor was right there to take our bags and assist us into the taxi. He was happy to see Bruce and told him he knew he had been sick, and he was happy to see him out of the hospital. Really, he said that! He shook Bruce’s hand. And now we are all amigos. The odds of getting the same taxi driver in Puerto Vallarta are pretty slim, but three times???? I should buy a lottery ticket!!

When we weren’t going to town, we took slow and easy mornings. After a late breakfast we sit on the aft deck and soak up all the sun and warmth we can. About 11:30 every morning an ocean breeze comes up and it is down-right chilly. That is our clue it is almost time for lunch. After lunch it is time for the recovering patient to take a nap. At first our forays away from the boat were to the beach. The walk to the beach was a big outing, and we would sit under an umbrella, soak up a little sun, and people watch.

Finally Bruce was ready for some physical therapy. I am certain you would all love to do your therapy here!

This is the “quiet pool”. It follows that there is a “noisy pool”. We come here to the quiet pool. Therapy was walking in the pool, then he added swimming around the island. The island is between the two bridges in the background. He has built up his pool time and has really improved. His inflammation and swelling in his joints is gradually subsiding, and what is left feels much better after pool time. 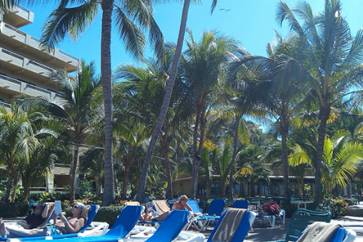 There are days when there is not a chaise lounger to be had. This picture was taken later in the afternoon, so there are some empty chairs. On a full occupancy day the chaises around the pools and on the beach are all taken. Almost everyone brings towels, drinks, suntan lotion, and something to read. Though there are some Kindles scattered among the people, most are reading books. And if I had to say what the most often seen, and being read book is, it would be “The Girl with the Dragon Tattoo” by Stieg Larsson. I don’t have that in my selection, and it drives me crazy to have it. After all, can that many people be wrong about what a good poolside read is? 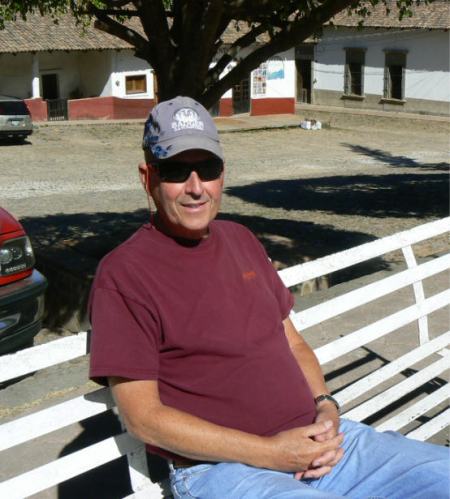 Bruce has significantly improved. People we met at the pool as Bruce was starting his pool therapy can testify that he has gotten stronger in health and spirit. In fact, he is so improved that we had a couple outings in the last week that were not medical in nature. Stand by for more fun from us – Living in Mexico.