All but one boat, from the original group that met in Bahia Santa Maria, made it into Turtle Bay before the big weather hit. We all gathered together at La Palapa Restaurant, enjoyed great fish tacos and cervesas,  and compared voyage stories. We had an easy time – compared to previous cruises and some of the other boaters – getting to Turtle Bay from San Juanico. [The photo above was taken by Dennis on S/V WINDWARD just outside San Juanico.]   We told the fleet, at lunch that day, that we were leaving  the next morning to preposition at Cedros Island, taking a chunk out of the final voyage from Turtle Bay to Ensenada. The plan was to get going early, while the winds were down, and be settled before the afternoon winds piped up. The other boaters decided to wait a day.

We departed Turtle Bay on Friday, June 3rd, at 0700. Our destination was the anchorage at the north end of Cedros Island. We made good time in spite of the NNW’ly winds and a strong northerly setting current. And, once again, the weather guys didn’t get it right. The wind in the anchorage was not out of the NW, but straight out of the north and into the anchorage, making it unprotected with untenable conditions. We instantly rejected the anchorage as unsafe.  It also meant we would not get a decent night’s sleep, which we needed, in preparation for our last overnight voyage on the Baja Peninsula. We back tracked about six miles and anchored off the island further south. 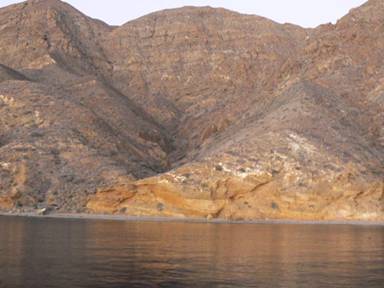 It wasn’t a perfect anchorage, as we were subjected to strong winds that ran down the arroyos right onto us. The arroyos are dry creeks or river beds. The winds pop up over the top of the island and then rush down these arroyos like a kid on a slide. Try not to anchor off one of these arroyos, if possible. We did because it was where we found a shallow spot to drop the hook. There are few places to anchor along the east coast of the island. Generally it is steep to, with a narrow shelf in a few places – if you can find them. We anchored in 35 feet of water, and the shelf dropped off quickly leaving us in about 70 feet. Once again, the charts didn’t accurately reflect the island. We settled on this spot, knowing it would be better than the north anchorage.

One of the common traits of these winds is the noise they make. It can sound like a freight train coming at you – or maybe a semi truck. This 2006 photo (above) might be where we anchored this year. In 2006 I heard the winds. It was about 0400 and was pitch black dark. I looked out expecting to see something, like a Mac truck – but saw nothing. The sailboat in the photo below was anchored further south on the island that night. 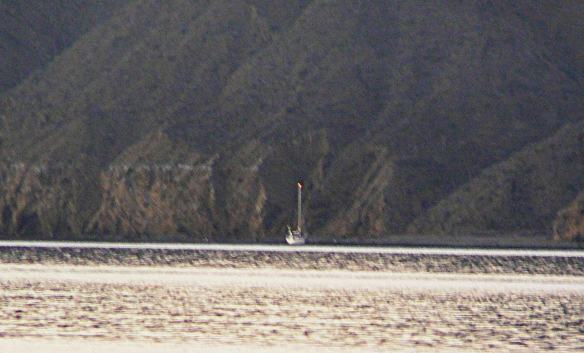 Hearing the wind, I expected the boat to act as if it were underway – at anchor.  Interestingly, there seemed to be no motion from the boat. However, it sounded like we were about to be run over. I put my hands and arms around my head and waited for what was to come – and then it was gone – just like that. The wind came with great noise, and moved on leaving a gentle bloop on the hull.   I often wonder if the sail boaters heard the wind and felt the way I did.   The captain slept through it all!

The trip north from Cabo San Lucas to Ensenada is often called “The Baja Bash” or “The Bash”.  Boaters say things like – “You doing “the bash” this year?” “When are you doing “the bash”? “I did the Baja Bash once – that was enough.” “I am flying home while the men do the Bash”. This major voyage is called Baja – because it’s a voyage on the west coast of the Baja Peninsula. And it’s called Bash – because the winds are generally high in velocity and on the nose, as are the seas. This creates a battle between the boat headed north, and the weather and seas headed south. Generally, boats can handle the bash better than the boaters. However, since it is the boater that sets the course and runs the boat, it is in the boater and boat’s best interest to not beat up either the boater or the boat if it can be avoided. There are books written on the subject. We have a book, but we believe our own general plans and precautions are more useful and consistent with our voyaging methods.

The trip from Turtle Bay to Cedros Island was animated, as I mentioned earlier. We were dealing with northerly winds and swell, and an easterly swell refracting back upon us. The motion seemed much like the action in a washing machine. However, it wasn’t intolerable. We were in no danger, and it helped to know that it was a short ride that day. I didn’t have to prepare any meals while underway, so it was one of the voyages where you just sit back and hang on. Once we were in the lee of the island it was a simple matter to serve breakfast.  I made an enormous pot of spaghetti that afternoon. It fed us that night and the next when we were underway. It’s a great choice for voyage food, because itis easy to serve, mostly because Bruce and John really like it. Bless their hearts – they liked the leftovers as much as the fresh pot – they said so.

We watched a movie that afternoon, then turned in for an early night and an even earlier get up. The guys were up at 0200 for a 0300 departure, hauling anchor, and preparing to get underway. I stayed in my bunk – something I got to do for most departures while John was with us. [Thank you, John!] I heard everything – so telling me to stay in bed and sleep is a bit of a stretch, but at least I was in a cozy place, safe and secure from whatever the seas planned to throw at us – as they almost always did. I heard the anchor chain and the anchor come aboard, the engines started, the slow warm-up of the engine with the change in the RPM’s, and just about the time I expect to hear full underway RPM humming, we slowed, slowed, then seemed to stop. This was not good. Not anything like I expected, and that drew me out of my nice cozy – and warm bunk – to find out what was happening.

We arrived at the most northerly point of Cedros Island – the anchorage of the day. Instead of the calm seas and wind that was predicted, there was thirty knots of wind, with ugly seas. The report of “ugly seas” came from a sport fishing boat that anchored north of us, on a shelf the day before. In case you don’t remember – we do not do 30 knots and ugly seas – no thank you. So, the captain turned the boat around and popped back into the spot where the sport fisher “Cowboy” spent the night. And whoo-wee, was it nice. We now know a very nice and undocumented shelf for hiding on the east side of Cedros Island. We all went back to bed, and got the best sleep of the night.

At 0530 the guys started the process again – hauling chain and anchor, getting underway, and this time the engines settled into normal RPM noise. I went back to sleep and got the best rest I got on this voyage of the Baja Bash. And,yes – finally – we are on the final leg of the Baja Bash – Cruising in Mexico from Cedros Island to Ensenada. Stand by for the last voyage – Mexico Cruising – The Baha Bash.