After six days of wind and rain we are finally underway.  Our destination is Eureka, CA.   This will be an overnight voyage, since the seas are down and we can put another third of the trip to San Francisco Bay behind us.  We don’t have much time before the next system rolls in, so we want to get as far south as possible.

I wanted you to see the Red Flashing light that indicates the center of the channel under the Newport, OR bridge.  We couldn’t see it until we were almost under the bridge the night of arrival.

We always have a good time in Newport.  This time was no different.  We reconnected with our friends Nancy and Michael on the Newport Belle, http://www.newportbelle.com/.  Check them out!  Nice.   We all went to the Rogue Brewery that is located adjacent to the Marina.  We always get at least one fix there, as we love the food and the beer.   Their fish and chips are great!  (This picture is for you, Barry!)  We all got a shot glass taste of the Shakespeare Stout, that won a major award the day before.

We aren’t Stout drinkers, but after it breathed awhile it really wasn’t that bad!

We met new friends and had a great time while we were all in Newport.  Sylvia and Ken just arrived in Newport, after sailing their 35 foot Nauticat, ANN LUCIA, 52 days across the North Pacific from Yokohama, Japan to Victoria, BC, CA.  WOW! 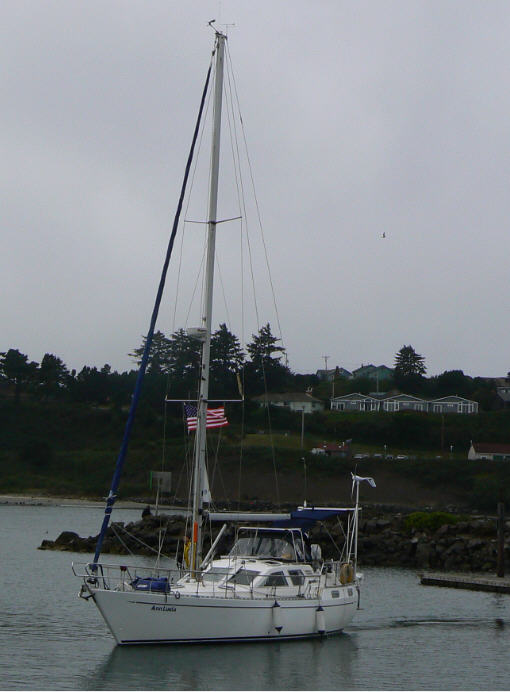 We applaud their resiliency and adventurous spirit.  And –  they are still smiling!

This photo was taken the day we rode the bus into Old Town Newport.  We had a great meal at the popular Local Ocean.  It is worth the wait! 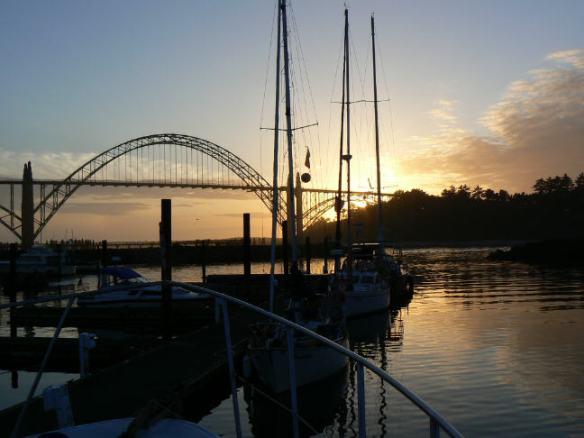 We left Newport at first light.   One parting picture of the Newport Bridge.

Our day started a bit bumpy but has steadily settled down and the seas smoothed out, as forecast.  We had two options for today.  If the seas were too lumpy we would pop into Coos Bay for the night, then get underway at first light.  Or, Plan B, go overnight to Eureka, CA.

This photo was take an at 1430.  The seas have built up since that time with NW afternoon winds.  We are now seeing sustained winds of 13 knots.  We are just off Coos Bay (1620) and we should round Cape Blanco at sundown.

Dinner will be served and cleaned up before sunset.  And we will settle down for the night voyage.  Wish you were all here (to do my night watches) – Voyaging on D/V!