[I am deeply apologetic for all the time I left you in Morro Bay.  Our life got very busy and my mind just couldn’t put pen to paper. ]

We spent five days in Morro Bay (9/17-9/23). I love it when weather keeps us somewhere fun. When we are in voyaging mode, it is never a hardship to stay where it is calm and safe as opposed to gnarly seas – and Morro Bay is a fun place to be. And not just for us, there were droves of tourists and day visitors walking around the waterfront town, enjoying all the shops, restaurants, coffee shops, and the view of the bay. The weather was perfect while we were there.

There is no marina in Morro Bay for general transients. Most transient boaters tie up at the Morro Bay Yacht Club or to one of their mooring balls. 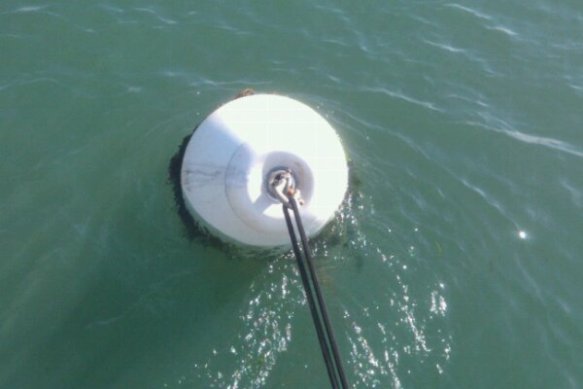 We chose a mooring ball. We used our little dinghy to get back and forth from the boat to land. The yacht club provides a dinghy dock on the inside of their big dock. We were one boat, of several, that were in-transit. Most of the boats were sailboats that were headed south, ultimately to Mexico. There was one motor boat on the dock. They came from the south and were headed home to San Francisco Bay.

Never to let dust or mold – grow under his feet, the captain thought we should not waste five whole days being tourists, so we took a day and a half and moved the car from Antioch where we left it when we departed San Francisco Bay. This was no ordinary event. Getting from Morro Bay – which isn’t on the way to anywhere- was an exercise in transportation modes. One afternoon we caught the Enterprise Rental Car shuttle van to San Luis Obispo to rent a car. That leg of the trip was fun.

San Luis Obispo has a famous weekly farmers market, on Thursday evenings. We were just in time to go to the market. The Enterprise driver and one of his other clients spoke rave reviews of the market. We couldn’t wait! What they failed to tell us is that you can’t park in the city without feeding a parking meter. In fact there were blocks and blocks of meters that took only change, of which we had none. Not one quarter! We kept driving a block further and further expecting at any street to see free parking – nope! So, we just kept going, disappointed and somewhat miffed at the city for their parking meter extravaganza!

It all worked out well, though. We planned to have a nice dinner out and so we started looking for the perfect place to eat. This was our first time in the area with an automobile. We had no idea where the best restaurants were. No problem! Our new Samsung Galaxy S III phones asked Yelp for suggestions. What a great tool for the stranger in town. We ended up in the little seaside town of Cayucos, CA. Dinner was at Café Della Via. We shared a Caesar salad and Clam Linguine. They brought us all-we-could-eat sour dough bread, and oh my – it was a feast and more than enough for the both of us. We were glad we shared!

We got back to the marina just about dark, and left again in the rental car – at 0800 the next morning.

We drove (2 hours plus) to Hanford, Ca and the Amtrak Station. We left the rental car at the train station, hopped the train (3 hours plus) to Antioch, CA. We walked a block to the car. Drove the car (3 hours plus) back to Hanford, Ca, and picked up the rental car. At this point I had to drive also – something I don’t do much these days – and it just got dark. From the Amtrak station we drove (2 hours plus) to San Luis Obispo, where we dropped off the rental car. From San Luis Obispo we drove (20 minutes) back to the marina arriving a few minutes before 2300. It was a very long day – the part of the trip where I had to drive was the worst for me. It was a dark and winding two lane road with occasional passing lanes, lots of local traffic, and everyone in a hurry. We got where we were going safe and sound but it was stressful. This was the most complicated car transit we’ve done. It would be nice if we could just whistle and the car would come to us.  🙂

Very tired and relieved to be home, we quietly got in our dinghy, started up our 2 hp air-cooled engine and put-putted out to the boat. It was totally quiet on the dock except for our little engine. We were on the boat in a matter of moments. I went into the house, and Bruce was out on deck securing the dinghy when he noticed a horrible sight. A boat on that very quiet dock was on fire! We could see fire in the upper helm station. Bruce called 911, jumped back into the dinghy to go alert the boaters and help get boats clear of the fire. One sailboat was side tied to the burning boat. The two men from the burning boat were out on the dock by then yelling at the side-tied boat to get away. Bruce raised our new friends from their bed, on the sail boat aft of the burning boat. He helped them get away and tied to a mooring buoy. The other two boats got away undamaged. As all this is happening the flames are growing and now engulfing the house of the boat. The fire department arrived and stopped the advance of the fire in time to keep the boat from sinking which seemed a likely event and protect the dock and yacht club. The men that were on the burning boat – a Bertram sport fishing boat – got off without harm but with only what they were wearing. It could have been a different story. This is the first time I saw a boat on fire. It was horrifying. I slept light that night. (News footage on the boat fire.) The boat was a total loss. Its a sad day when a boat dies

Though the docks were blackened with smoke from the fire, I don’t think there was serious damage to the yacht club.

The next day there were still firemen around watching and investigating the fire. Saturday is a busy day at the Morro Bay Yacht Club. The club is very active and transients generally have to move to mooring buoys on weekends so that the members can launch their race boats. Not the way the transients intended to leave the dock, but the docks were already clear that morning.

We took two days to rest up from the marathon car transfer, then on Monday weather allowed us our second long day of voyaging. As always, we departed at first light with the intent of arriving before dark. It was another beautiful day on the ocean. The marine layer cleared off mid-day and left us with gorgeous blue seas. It was another long day – 13 hours and 100 miles.

Rounding Point Conception quickly put us in the Santa Barbara Channel. Hello So Cal! The climate change can be dramatic between north and south of Point Conception. Depending on your direction you are putting on more clothing and bracing for the cooler temps and potentially more animated seas or shedding clothes and luxuriating in the almost tropical velvet air.

It was all but dark as we pulled into the basin in Santa Barbara. The marina requires boats to come to their accommodation dock before assigning a slip. The captain went up to the office and registered, paid, and got our slip assignment. By the time he was back on the boat it was dark, we were tired, and still had much to do before we could call it a day. Back underway we went to our slip, tied up, and secured the boat. The dock was rinsed, our decks were rinsed, and the electrical power cord plugged into the dock and the boat. Whew! The major heavy work was done by the captain. While he did those jobs I restored the interior to living status as opposed to voyaging status.

By the time we finished we were both very happy to realize that the air was deliciously velvet calm and the temps warm. There was a Great Blue Heron and a Night Heron fighting for dock rights. The night heron was sitting on the dock as we pulled to the dock on arrival. He was not afraid of the boat or me and did not give way his hunting perch. However, a short time later the Blue Heron arrived and made it clear he was king of that dock. It turned out okay for the Night Heron. He became king of the swim platform – our swim platform – for the next two days.

Not a bad spot for him – or us – in Santa Barbara.  We spent a day walking around Santa Barbara, and then we were underway – again – this time to our final fall resting place – Channel Islands Harbor Marina.  We spent about two months in Oxnard.   Most of the time was dedicated to getting the captain’s back and shoulder issues resolved.  He is doing very well now – needs to focus on his home physical therapy, but is very much improved and continues to improve daily.

This is a quick catchup – forgive me.   However, stand by – I promise to catch you up to where we are – headed to the Newport Beach anchorage for the night!