I am excited!  We are very close to the ocean!  We left Sand Island and made for Rainier, OR, where we made a brief stop. We needed a few groceries. They don’t have an official grocery store in Rainier, but they have almost anything else you might need.  Several eateries, but one came highly recommended. We stopped in at the Cornerstone Cafe and had one awesome, two-napkin burger! Need I say, more?

We found Grocery Outlet and the Chevron Food Mart. We completed our purchases and were about to head out the door  but we changed our minds.  Just then a big squall quickly moved through dumping hail and rain. We sat that out in the Food Mart, then hurried back to the boat, got underway, and went to the dock at Walker Island to spend two nights. I think today was the wettest day in our all our docking experience – very wet and soggy lines!  We had intended to go on to Astoria but the conditions were more acceptable at Walker Island. And, with a few extra groceries on board, there was no hurry. 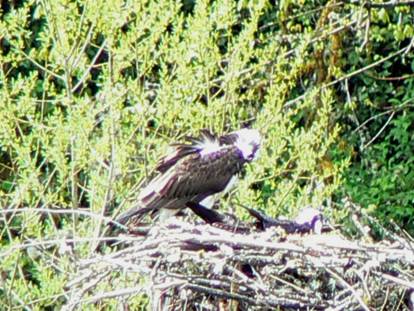 The highlight of our stay was the close proximity to an osprey nest.  We watched the pair, taking turns incubating the eggs.  This is probably the closest we have ever been to a nest. Unfortunately, my camera is not cooperating. It is all user error! I am still working to correct my problems though not having much luck. I started experimenting with the camera a week ago, learning how to take pictures, where I was in control – oops! Not a good idea. Meanwhile, here is the best picture I could produce between the camera, me, and some software. One parent is sitting on the eggs, and one sitting on the edge of the nest. 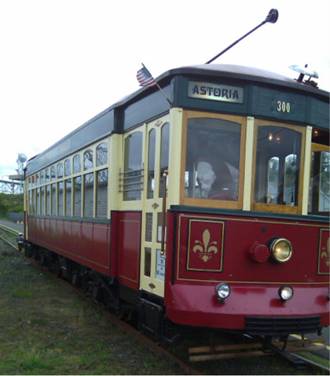 Friday morning we headed into Astoria. It was a great ride. At 1457 RPM, we cruised at just under 10 knots, running with the river current! Wow! We love that kind of cruise. (We rarely get that speed, without the aid of current, with RPM’s in the 1800 and 1900 range.) The day was a mixture of sun and rain. We got into our slip before noon and off we went on our day’s missions. After being on the boat for 10 days, there is always a list when we get ashore.

Friday was perfect timing.  Astoria has a waterfront trolley, beautifully restored and run by volunteers, that has a stop three blocks from the marina. Right now it runs Friday through Sundays, starting at noon. We rode it every day over the weekend, with unlimited trips for $2.00 each per day.  A great buy and we got enough information on the Astoria waterfront, from multiple tour guides, that we could do the spiel ourselves!

Astoria is the oldest town on the west coast, even older than San Francisco, according to the guide. They will be celebrating their bi-centennial next year. The mound in the water, in the photograph below, is a pile of ballast stones from old sailing ships.  The ships came from far away, arriving empty, using the stones for ballast.  The stones were tossed overboard in exchange for fish they loaded for the outbound trip. There are several piles visible at low tide. 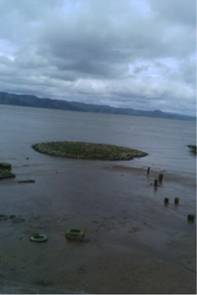 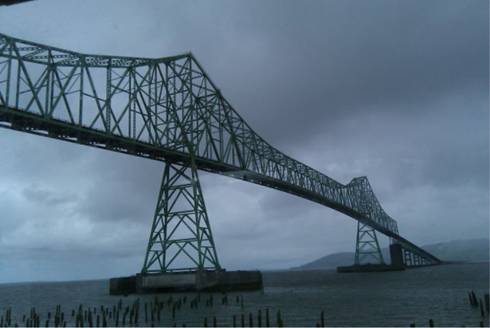 The Astoria-Megler Bridge is always a stately site. I took all the trolley ride pictures with my new cell phone camera. I am very happy with the pictures it takes! (New cell phones are tiny computers!  It takes a little work to learn how to use them.)

Our first mission was a major grocery provision. We rode the trolley out to Safeway, did a major grocery shop, and called a taxi to take us back to the boat. Once groceries were stowed, off we went again, to catch the trolley, and have halibut and chips ashore at the Ships Inn.  And once our hunger was assuaged we got back on the trolley and did the entire trip and then back home to the marina. The next day we rode the trolley to within a few blocks of an Urgent Care Center. I had a minor ailment that needed attention. I only mention this because so many people wonder how we manage life as full time boaters,  always being somewhere new.  We do things everyone else does, when it comes to everyday living, but with a different spin. We use our internet connection, with our aircard, to find whatever we need, from groceries, public transportation, boat parts, medical assistance, etc. And, once that was accomplished – you guessed it, we got back on the trolley, got off downtown and had the open faced crab sandwich special at the Wet Dog Cafe, one the favorite places in downtown Astoria.  Both restaurants overlook the waterfront and are on the trolley route.  Everyone in the restaurants and the trolley wave at each other. Town folk wave, everyone waves! Astoria residents have made it their priority to be friendly to their visitors, and it really shows. On Sunday we got on the trolley headed for the Farmers Market – which didn’t start for another week! There were several disappointed tourists on the trolley when we all found out we were a week early. Not to miss an opportunity of an outing, we stopped in at the Astoria Coffee House and Bistro. Great coffee and great coffee cake! Look for the big red coffee cup out front.

We had intended to spend three days, instead of the five we were in Astoria, but a big weather system blew in – literally, and we felt we were best protected by staying where we were. We were in a slip back in a corner of the marina, with the seawall off our starboard quarter. Tide was very evident. At one point, when the storm was at its worse, we were getting salt water rained on us as it broke over the seawall. We don’t generally get salt spray at the dock! The two pictures represent almost high tide (see there are still green rocks showing that would be underwater at full high tide) and low tide where 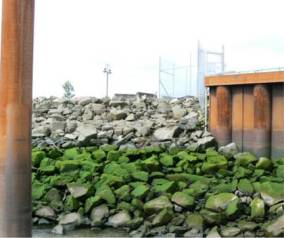 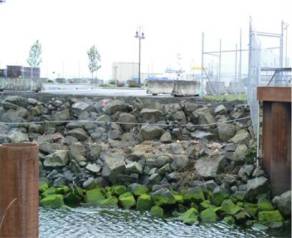 we can’t see above the sea wall.  Notice the waves crashing on the seawall into the marina. All those waves refracted off the wall, and came rolling in our direction. The waves had D/V rolling at the dock, as they hit us abeam. I had several brief periods of mild seasickness at the dock! Amazing – I never suffer from seasickness. 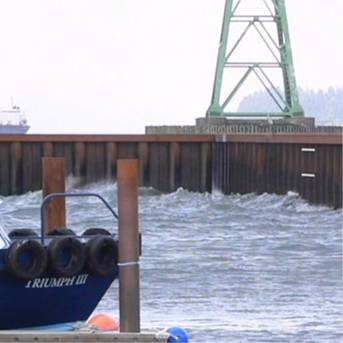 And now the really big news! The weather has finally moderated, and the ocean conditions have settled down to something along the lines of boring – which most you know we like. We moved to Ilwaco, WA, yesterday to preposition for a quick getaway. Our friends on M/V NIRVANA caught up with us here in Ilwaco. Early tomorrow morning (Friday) we all will be getting up early, getting underway, getting across the Columbia River Bar, and getting away from the magnetic influence of the river!  We recently heard that the river is a magnet that doesn’t like to let the people leave. This probably explains our unexpected and unplanned winter on the Columbia River. And it will explain why we do not plan to return to the river anytime soon!

The captain has checked and double checked all the important systems in preparation of crossing the Columbia River Bar and making the first leg of our voyage, tomorrow, to Grays Harbor. I have been walking, repeatedly, though the boat looking for innocent items that are not properly secured. One of the things that happen when staying in one place for months on end, is things tend to be left out for convenience sake and become almost invisible in the day to day routine. And those things can fall, spill, break, and generally make a mess- at the very least, at the worst time possible. The refrigerator shelves have non-skid, and first thing in the morning I will install tension cafe curtain rods on each shelf to secure the contents and prevent anything from moving around. I will also secure the doors on the outside so they wont fly open. We don’t expect any extreme conditions; these are just sensible precautions we take. This is generally only necessary for river bar crossings and animated seas which we try to avoid. So the hatches are battened, the portholes are secured, everything (I hope) is in its most secure place.  Hang on baby, here we go –  Underway Again –  Cruising 2010!

8 thoughts on “Tides, Current, and Salt Water – We’re Back!”