You know how it feels thirty to fifty miles from home, that you haven’t left on vacation, or that vacation is over though you aren’t yet home?  We have made the voyage of 55 miles from Neah Bay to Port Angeles several times. It feels so “close to home” that it doesn’t seem as if we are cruising.   We left Neah Bay, after being at anchor for four days.  The winds in the central Strait of Juan de Fuca created gale and small craft warnings.  We avoid such conditions.  There was no reason to rush into high winds when we are perfectly content at home – in Neah Bay.   I know, for some, it is hard to imagine just sitting on the boat for days, but we really don’t “just sit”.  We are home, and as you know from living in your own home, there are always chores that are calling.

One of the projects Bruce did over last winter was to install auxiliary main engine alarms.  He worked a small project to refine the installation.  Also, we had some galley cabinetry work done a year ago, and he is improving on the work that was done by novices.  We thought that the galley project would be done shortly after the installation last spring, but it didn’t happen.  Now, it is getting done, and I am happy. 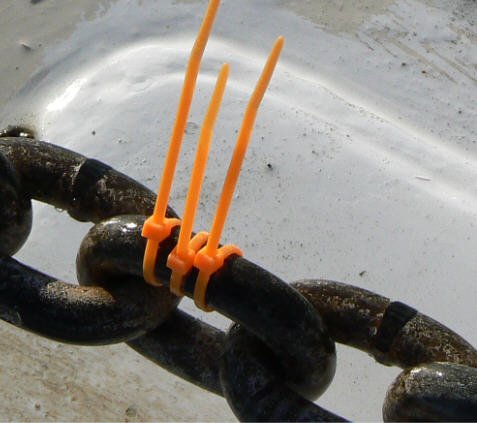 We run the generator about twice a day, to take the chill off – if it is needed, make hot water, and charge the batteries.  That’s when I do laundry, vacuum, cook using the microwave or toaster oven, make water, etc.  It makes the generator happy (to be loaded up), and it gets work done, too.  I didn’t get all the laundry done at anchor, though.   There was a red tide in Neah Bay, and we don’t run red tide water through our watermaker.  Red Tide, a natural phenomenon, is an algae bloom that can be toxic  – thus no running it through our watermaker.  We had plenty of water, just not for optional extras.  Sometimes the bloom is very red and obvious, but this time it was more brownish and I doubt you could have recognized it as red tide in a picture.  This is not a rare occurrence and it is unwelcome.   Sometimes they are quite devastating, killing underwater sea life. Think about all the creatures you see living on the underwater portion of the docks.  Some years ago there was a red tide in Ventura Harbor.  It was devastating.  It lasted for several weeks, and killed every underwater sea creature in the marina – causing a horrifying stench.  Commercial fishermen, pleasure boaters, and town people worked together and hauled over 300,000 pounds of very smelly dead matter out to sea.  We were told that you had to wear a face mask to tolerate being down on the water.   This was nothing to that extent.  Sometimes they come and go on a single rotation of the tide, other times they stay around.  You can read more about Red Tides at http://en.wikipedia.org/wiki/Algal_bloom#.22Red_Tides.22.

The winds finally abated and we departed Neah Bay for Port Angeles.   I am promised that the early wake-up calls are over – for now.  So, it was a 0700 wake-up (isn’t that early??) and we were underway by 0755.   We stow last minute items for the voyage and weigh anchor.  I run the windlass from the pilot house (all nice and cozy with the heater running, courtesy of the generator).  Bruce stands out on the bow, using a fresh water hose, washes the anchor chain off as it comes aboard.  He has a series of hand signals to communicate to me to raise the anchor, stop, or let it out, depending on the circumstance.  Bruce is meticulous in washing the chain for a couple reasons.  Our boat is all aluminum, and salt water in the bilge will cause corrosion.  And, we don’t want any crustaceans, worms, seaweed, etc., coming aboard with the chain because they will start to smell – really bad – and then so does your boat!  No thank you!  There was one more mission this morning.  Some of our chain length markers (plastic tie-ties) had broken down and it was difficult to tell how much chain was out.  He replaced the old markers with new neon orange ones.  They will be very visible now!  We had breakfast after we got underway. 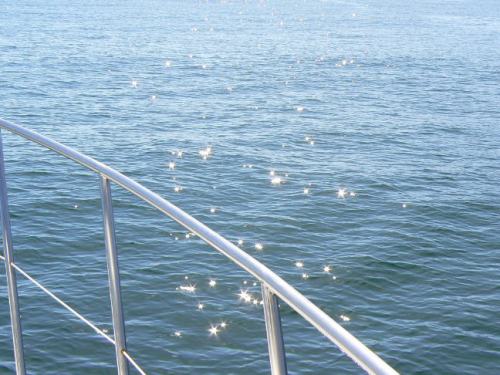 It was a beautiful morning.  No wind, fairly flat seas that glittered as if there were crystals in the water. The sun was shining bright – a little haze in the distance, but no threat to us.  We had a great ride.  We started out with an adverse current.  The current was headed west out the Strait of Juan de Fuca and we were headed east.  It wasn’t a problem for us, because there is a counter current in close to the Washington coast. 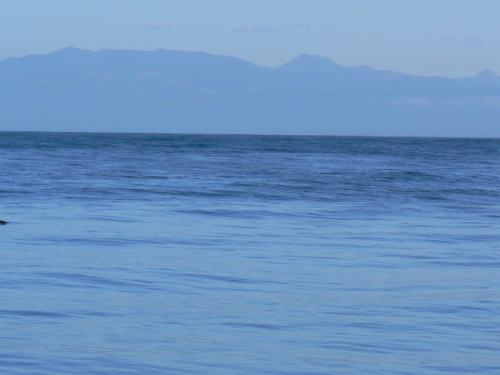 You can actually see the demarcation line between the outgoing tide and the counter current.   We didn’t get a “free ride” the entire way, but most of it was good.  We had a variety of speeds from 11.5 knots to crossing the line immediately down to 9.5 knots, and gradually to 5.5 knots and as the current turned we came back to almost 9 knots.  Most of it was with a favorable speed of almost 8 or higher, which means we used less fuel.   We also got a push from the six or seven foot swells coming from behind us. 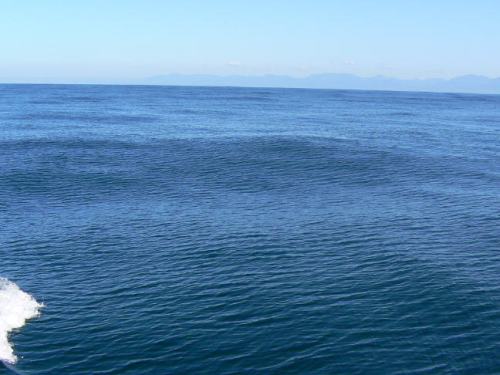 With no wind, the swells off our port quarter – with a long period, were not a problem.   DESERT VENTURE responded to the swells in what seemed like a dance routine.   It went something like this – slide 2-3, slide 2-3, slide 2-3, dip 2-3, sway 2-3, then start over again with slide 2-3, etc.  I‘d call it the “Crystal Water Waltz”.  So, as we moved along on our bottom, the swell would come up from behind, push us on our quarter causing the bow to dip slightly down to starboard (right) briefly, then sway back to port (left), then settle back into a level forward motion.  After sleeping on this, last night, I thought I should explain the mechanics of what was happening.  As the swell, called a following sea, comes up on our quarter it pushes us, and this pushes the bow slightly off course (this is the dip), then the auto pilot responds, adding on additional rudder to correct and restore the bow back to the proper course (this is the sway). 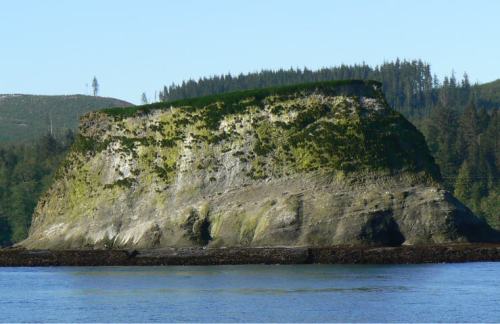 I mentioned that I’m learning more about my camera and photography.  It’s one step forward – one step back.  I learned some important things while I was sitting at anchor studying my book.  I am NOT to take landscape photos unless it is within thirty minutes of dawn or dusk.  And, I can NEVER take landscape photos without a tripod.  I am so in trouble!  I have never considered myself a rebellious person, but I’m going to work to get the best photos I can get and break the rules.  Apparently, I will never be a professional, but I will continue to take pictures.  How does that sound?  The good news is, aside from the broken rules, I am learning more that I can do.  So, hopefully, I will continue to improve and even more importantly, you may see the improvements, too!  After all, the pictures are for you!   I was taken by the lone tree left standing on the mainland just beyond Sail Rock.  It’s wrong, to me, to leave a solitary tree that must fend off all the weather on its own.

Our first stop in Port Angeles was to the fuel dock.  We have four tanks and we put fuel in all of them.  We have a day tank that the main engines and generator runs off of, and Bruce moves fuel from the other tanks to the day tank in a manner that keeps us stable, thus the reason for needing to add fuel to all tanks.  This isn’t my favorite boating activity.  I usually run the nozzle, and Bruce watches the tank tender readouts.  I much prefer to be on the nozzle end, because I am not responsible for too much or not enough fuel in the tanks.  However, it means I am hunkered down, holding on to the nozzle.  I usually have a knee pad, and something to help me keep the nozzle handle in the “go” position.  Spilling fuel into the water is an absolute no-no.  We are always extremely cautious, and are always happy when the job is done.  Once the fueling was done, we moved to the guest dock.   Bruce rinsed the salt off the boat and I restored the house to living status.  We had a nice dinner at home, and all was well.

The next day our friend, Wally, came down to the boat and we visited for awhile catching up on all the waterfront gossip.  He gave us a ride to Safeway afterward. [Thanks Wally!  We hope to see you for dinner in Port Townsend.]  We brought a collapsible cart along, and it was enough for the provisioning we did.  Leaving Safeway, we walked downhill to downtown Port Angeles.  We were looking for a particular store – we did not find. (Our problem is that we are in so many different ports we sometimes get mixed up what store is in which port.  We probably visit more different Safeway stores, than most people.  Invariably, the restrooms are on the opposite corner of the store than I remember! ) We did find a restaurant where we had lunch.  After that we continued our walk back to the boat.  It was a windy, in the face, walk and I was really glad to be back aboard and out of the wind.  The groceries were stowed and we relaxed the rest of the day.  We were – At home in Port Angeles.

3 thoughts on “Sail to Port Angeles”