I left off just as we got underway, at 0530, from Cedros Island. I was tucked in my bunk, and stayed there for several hours. I admit I spent more time in the bunk on this series of voyages than ever. With Bruce and John doing the night watch-standing, that left me to do the bunk sitting. Ha. It was less animated below, making my ride safer and easier.

Bruce served John and himself the first course of breakfast – cold cereal. I stayed put in the bunk long after sun up.   When we popped out of the lee of Cedros Island the seas were 5 to 6 feet and the winds were 15 to 18 knots. There was animation that told me to stay put for awhile. Our plan was a straight shot to Bahia San Carlos in the event weather worsened.(We stayed that course until a few miles offshore, then changed to a more NW’ly course – continuing on as the weather abated to some degree at that time.  We, then made course to avoid Sacramento Reef, then on directly to Ensenada.)  I went topside when my hunger pains could no longer be ignored. I knew the guys were ready for their second course of breakfast.

Mid-afternoon the seas started building again. At 1400 the winds were 20-22 knots, and the seas back up to six feet on a 8 or 9 second period. Dinner is generally served before dark, so clean up is done and everything secured before lights out. It was a good thing we had dinner out of the way before conditions really started building. Even though dinner was cooked – remember the big pot of spaghetti – it still had to be heated and served – with a salad and garlic bread.

Sunset – 1941, and winds were about 16 knots, and the seas were 4 to 5 feet at four seconds – square waves. It is the constant up/down/splash motion I have mentioned previously. The bow goes up, the bow goes down, and the seas spray over the deck and on this trip the windshield – well actually the entire boat.

We were off Sacramento Reef when all this started. There are two possible routes to take around this hazard. You can go inland, an easier – less animated, but longer trip. However, this inside passage is clogged with kelp. The risk of getting mixed up with kelp could hamper, or even disable engines – if enough of it got caught in the engine intake, so was not an option this night. The sun was in our eyes, and darkness would hit before we exited. We would be blind to what was ahead of us so we chose the outside route, which is normally animated due to the ocean rushing onto a shallow area, causing the seas to refract back.  Add to that the winds and we had mixed up seas. The motion was such that we slowed down to 1530 rpm, alleviating some of the motion.

The sun is not setting in the rain. That is salt water – lots of it – coming from the square waves. The up and the down and the splash just seemed to come bigger and sooner, so we dropped our rpm again.

Whoosh! More salt water! This was record salt water for us. Sitting back in the salon, I could see water dripping off the side fly bridge overhangs, water flying past the salon windows – water, water…so much flying water! 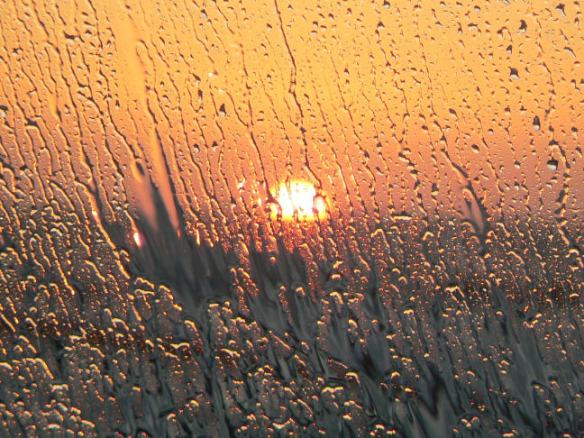 Bruce was at the helm in the last moments of daylight. We were all in the pilot house. In a blur of motion Bruce grabbed the wheel, put the auto pilot on standby, and started turning hard to port. His words were…well something along the line of Oh NO…Oh No…well you get the idea. John and I, sitting at the settee saw nothing but lots of water, then Bruce yelled, “Whale dead ahead – on a collision course!” Huh? John and I never saw the whale, but fortunately Bruce did, and took quick and proper evasive action. Neither the whale nor DESERT VENTURE would have come away unscathed if we had collided. We were shaken by the event, but relieved that no one came to harm.

In speaking with our sailboat friends later, they related seeing hundreds of whales – their sailboats mixed in with them, very fearful of a collision. Fortunately, the whales and the sailboats managed to continue on their way unscathed. Rick, on SV MUSIC, told us he decided to stay on course and hoped the whales would do the same. It worked.   It doesn’t always end this way.  Many boaters have had devastating/boat destroying experiences caused by colliding with a whale.

And then it was dark. The sun was gone. And that is when I like it least- those first moments of dark when your eyes haven’t adjusted – and that night was no exception. That night everything seemed bigger since there was no way to measure our ups and downs. We did know they got more pronounced, and gradually the speed was reduced again. We were pitching moderately with heavy pounding. Oddly the winds abated but the seas increased. Finally we reduced speed to 1350 rpm. Our speed was under 4 knots…but at least the pitching slowed and we breathed a sigh of relief. It meant we were going to spend more time on the water, but at least the horrible pounding was down to something manageable. Sometime in the 0200 hour speed picked up gradually and by 0400 we were back to our cruising speed of about 1750 rpm.

Have you noticed fewer photos lately?  A rule on board D/V is, “One hand for the boat and one hand for you”. We could have used an extra hand as it was. Standing and taking photos just wasn’t an option during our most exciting moments. Though John and I would have liked to have seen that whale headed toward us, neither of us had any intention of leaving our secure seats.

In all the years and nautical miles we’ve cruised I never wished to be somewhere else – until this voyage. I never felt fear or was in danger. I got mad at a wave here or there that tossed me around, but I was okay. It was somewhere on this last leg, that I was wishing to be somewhere else – maybe a hotel room in San Diego? Yeah, that would work. Since there was no way to get there from where I was, I gave it up quickly. I was just tired of nasty seas and was ready to be done with this voyage.

Bruce and John took it all in stride. To Bruce it was a mission – get DV and crew to Ensenada safe. John seemed to relish every minute. I didn’t feel the slightest bit guilty letting John (and Bruce) take my mid-watch. I knew Bruce was getting real rest, with John at the helm, and so he was fit to share my watch, and John obviously enjoyed every minute at the helm. It worked great for all of us.

We continue to thank John for coming on The Baja Bash with us. Our trip would have been a different story if it had only been the two of us on board. For all my cruising experience, these were new extremes. I would have been uncomfortable (maybe even frightened) at the helm – worried I would not respond quickly enough to conditions, and Bruce would have gotten no rest because of my inexperience. So, though we can never say it enough, we say it one more time – “Thank you, John!”

Ensenada!
We consider Ensenada the destination and end point of the Baja Bash.  There is still 70 miles to voyage to San Diego, but it is generally an easy ride. Ensenada is located in Bahia Todos Santos. The conditions smoothed out in the protected bay. I started thinking we’re there – almost. This is a big bay and there was still more than an hour to Marina Coral. 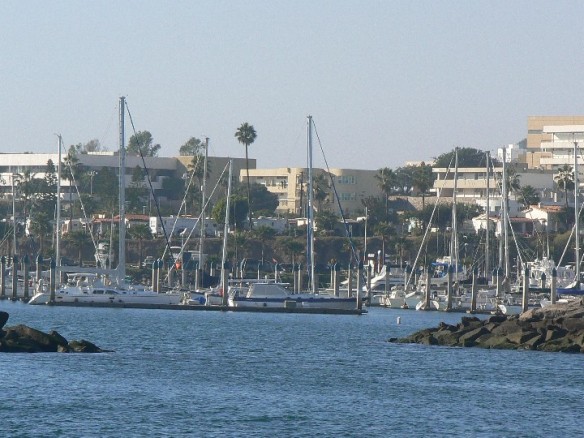 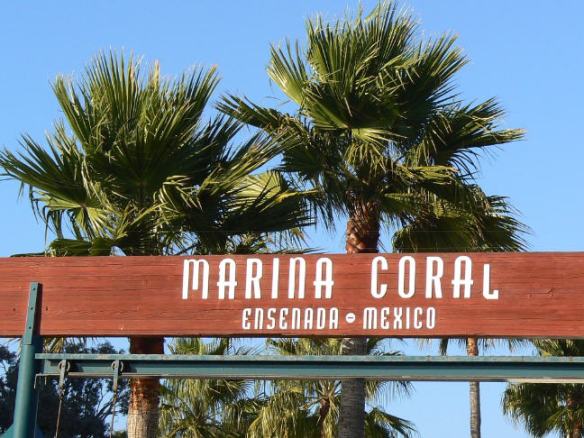 Last night faded fast as the marina came into view. It wasn’t “that” bad, was it? Well, yes, but it is over and we are safe and sound. DESERT VENTURE kept on keeping on – never missing a beat. The crew did their part keeping her headed in the right direction, checking systems along the way, and hanging on. It was a relief – for all of us, to tie up to the dock and shut down the engines.

Ahhh, the sound of successful silence.